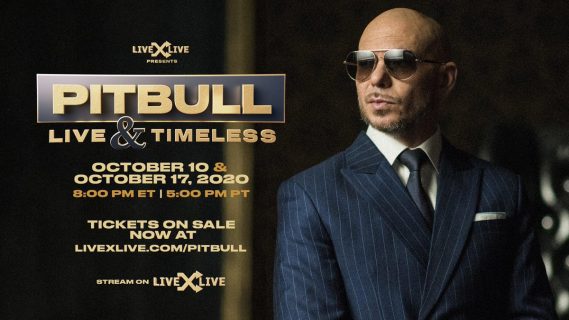 LiveXLive Media (NASDAQ: LIVX) (“LiveXLive”), a global platform for livestream and on-demand audio, video and podcast content in music, comedy, and pop culture, announced today that it has aligned with Pepsi for its “Unmute Your Voice” campaign for LiveXLive’s upcoming Pay-Per-View concert serieswith Grammy-Award-winning superstar Pitbull. As part of the sponsorship and campaign, Pitbull will ‘unmute’ his voice during multiple ‘segments’ in the performances and encourage music fans to unmute their voices by registering to vote. Pepsi will also share a post-show sizzle highlighting the show reminding everyone to register to vote.

“It’s an honor to partner with Pepsi and LiveXLive for ‘Unmute Your Voice’ get out to vote campaign,” said Armando Christian Perez (Pitbull). “It’s important for all Americans to register and get out to vote this November.”

Pepsi’s “Unmute Your Voice” voter awareness platform debuted during the 2020 VMAs to encourage young Americans of all backgrounds to use their voices by voting. The LivexLive Pitbull concert follows the “Unmute Your Voice” concert on October 8 & 9, featuring an array of talented artists connecting with fans on the importance of voting during a two-night event with Triller and Rock the Vote. Pepsi’s “Unmute Your Voice” platform is a concerted effort to engage and educate 18-24 year olds looking for more information on the power and functionality of their vote, and is just the latest in Pepsi’s efforts to use the brand’s legacy in music to create a positive impact in 2020, including the brand’s role in helping bring Global Citizen’s “One World: Together at Home” event to viewers around the world.

“Young people, especially Hispanics and Black Americans, lag on voter registration and often question if their vote will even matter,” said Esperanza Teasdale, VP & General Manager, PepsiCo’s Hispanic Business Unit. “That’s why the Unmute Your Voice program is so important – we want to ensure the next generation of Americans understand the power of their voice and their vote, and few connect and drive enthusiasm with that demographic better than Pitbull. We’re so excited he is a part of this program and helping bring awareness to voting opportunities for young adults this year, and can’t wait for Saturday’s big show.”

Pepsi is also on board as a brand partner for the launch of Pitbull’s new podcast and vodcast “From Negative to Positive” along with StateFarm, debuting today, Oct. 8, 2020 on LiveXLive subsidiary PodcastOne.

“We’re thrilled that Pepsi is bringing its “Unmute Your Voice” campaign to these one-of-a-kind and momentous performances with Pitbull to encourage Americans to vote as we head toward this very important Election Day,” said LiveXLive’s President Dermot McCormack.

This livestream PPV performance is an experience that will allow fans from all over the world to dance and party in their living rooms or backyards while safely viewing the global sensation, Mr. Worldwide. With two unique events filling homes with music, a major dance party and the joy of Pitbull’s performance, each show will have unique setlists as well as additional surprises.

The full performance on LiveXLive will include a variety of ticket options including merch, as well as a package to view both shows. Premium tiered pricing includes exclusive merchandise, a package including tickets to both performances and other event-exclusive perks. Ticket prices start at $19.99 with bundles available for both shows and exclusive merch starting today on LiveXLive.com.