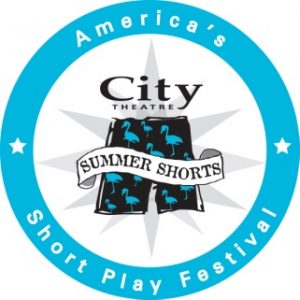 City Theatre and The Adrienne Arsht Center for the Performing Arts of Miami-Dade County join forces to present City Theatre’s first full-length musical – CAMP KAPPAWANNA — a world premiere musical that celebrates timeless summer camp experiences with hip, cool music and lyrics by Grammy® Award-nominated singer/songwriter Lisa Loeb and a script by rising national playwright and South Florida native Marco Ramirez.  With this season’s must-see musical, CAMP KAPPAWANNA, City Theatre set out to create a new classic for all ages: a fresh, original take on leaving home for the first time that, from start to finish, makes everyone in the audience feel as if they, too, are joining in the fun of summer camp! Tickets for the June 17 – 27 performances at the Adrienne Arsht Center are $25, and may be purchased through the Adrienne Arsht Center box office at (305) 949-6722 or online at www.arshtcenter.org.

Tickets for performances on July 1-3 at the Epstein Center for the Arts at Nova Southeastern University are available through the Epstein Center’s box office at (305) 365-5400 or online at www.citytheatre.com.

“CAMP KAPPAWANNA is the first of three Miami premieres slated for the 2010 summer season at the Adrienne Arsht Center. CAMP KAPPAWANNA brings to the community a warm and witty theatrical work that combines top-tier creative talent with a family-friendly story that will appeal to all generations,” said M. John Richard, President and CEO of the Adrienne Arsht Center.  “CAMP KAPPAWANNA is an exciting new musical created and inspired by a creative team deeply rooted here in South Florida and led by our artistic partners at City Theatre. This production has all the right artistic ingredients to thrill and delight South Florida families and the potential to touch audiences beyond Miami. The Center is thrilled to have participated in the nurturing and development of this new musical.”

CAMP KAPPAWANNA tells the story of Jennifer Jenkins, awkward and adorable and 12, a kid who hasn’t really found herself just yet.  She’s going away for the summer – her very first time leaving home.  From the start, CAMP KAPPAWANNA makes audiences of all generations feel as if they, too, are joining in the fun of summer camp.  CAMP KAPPAWANNA marks Grammy® Award-nominated multi-platinum selling singer/songwriter Lisa Loeb’s first musical production. Loeb created CAMP KAPPAWANNA’s music and lyrics along with collaborators Dan Petty and Michelle Lewis in celebration of her days at camp, where she first learned to play the guitar.

“Summer camp is one of those life-changing experiences that every child should have.  It teaches you to try new things, explore and make new friends.  It won’t always be easy, but you can forge true friendships and make lifelong memories that will stay with you forever,” said Loeb.

The CAMP KAPPAWANNA musical was conceived by City Theatre co-founder and producing artistic director Stephanie Norman, who tapped multi-Heideman Award winning playwright Marco Ramirez to write the book.  Says Norman, “We’ve produced seven of Marco’s plays on our stages — starting with his first professional production — leading to many accolades recognizing him as one of the nation’s rising talents.  His writing is smart, funny and strikes the right chord with kids – and adults.”

Ramirez’s Carbonell-nominated play BroadSword will premiere at the Adrienne Arsht Center later this month.  Ramirez is currently a writer on FX’s “Sons of Anarchy” and trained at the prestigious Tisch School of the Arts and The Juilliard School.

Lisa Loeb is a Grammy-nominated, platinum-selling singer/songwriter and actress. She launched her career in 1994 with the No. 1 hit song, “Stay (I Missed You).”  To this day, she is still the only artist to have a number one single while not signed to a recording contract.  Loeb carried the momentum of her early success into a multi-dimensional career encompassing music, film, television, voice-over work and children’s recordings. Her five acclaimed studio CDs include her major label debut, the gold-selling Tails and its follow-up, the Grammy-nominated, gold-selling Firecracker.  Loeb has starred in two television series, “Dweezil and Lisa,” a weekly culinary adventure for the Food Network and “No. 1 Single,” a dating show on the E! Network in 2006.  She tours worldwide, and in recent years has captivated a younger audience as she released the award-winning Catch the Moon in 2003, and 5 years later Camp Lisa in 2008. Catch the Moon included a companion board book that earned the prestigious Parent’s Choice Award and led to a series of popular videos for Noggin Network.

Marco Ramirez trained at both NYU Tisch and the prestigious The Juilliard School, and is currently a staff writer on FX’s “Sons of Anarchy.”  He has had seven plays produced at City Theatre, including his Heideman Award-winning “I Am Not Batman,” which also premiered at the Humana Festival of New American Plays.  Ramirez began his association with City Theatre while still a high school student at Coral Reef Senior High School, participating in the company’s KidShorts program to mentor talented young artists.  He has gone on to have his plays produced by The Kennedy Center, Mad Cat Theatre Company, The Naked Stage, Yellow Tree, Red Barn, The Juilliard School, and Actors Theatre of Louisville’s Humana Festival of New American Plays (where he’s twice received the Heideman Award). Other honors include a Helen Hayes Nomination, The Bryan Award for Drama from The Fellowship of Southern Writers, and the Le Comte Du Nouy prize from Lincoln Center.

Stephanie Norman, City Theatre Producing Artistic Director, conceived CAMP KAPPAWANNA as a family musical and rockin’ gift for many generations to celebrate summer.  Norman has collaborated with the nation’s finest talents as an actor, writer, director, and producer for over twenty years.  She is the co-founder and co-creator of the completely unique Summer Shorts Festival and in the past 15 years has produced over 300 plays by the nation’s finest talents, brought together the state’s largest collaborative ensemble annually, and led the company’s artistic and institutional growth.  Norman began her career working with Broadway producer Manny Azenberg on the NYC productions of Dreamgirls, La Cage aux Folles, Broadway Bound, Ain’t Misbehavin’, and Jerome Robbins’ Broadway and working in film production as an assistant to Mike Nichols on “The Birdcage.”  She has spent the past year collaborating with Lisa Loeb, Marco Ramirez, and a talented team of artists to create a completely fresh, original new musical.

As a special addition to this exciting premiere performance, City Theatre launches its 2nd Annual Art Contest, THE CAMP ME! ART CONTEST.  Children in grades K-8 may visit www.citytheatre.com to download a template and registration form to enter.  The contest runs April 1 – May 15 and winning entries will be enlarged and displayed at the Adrienne Arsht Center and Epstein Center as an exhibit of Florida’s finest young artists.