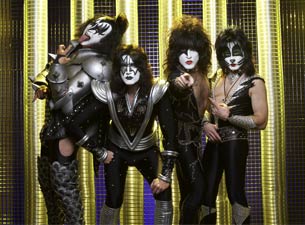 Throughout their 37-year career, KISS has sold 80 million albums, played for millions of people and become an integral part of American culture.  Now, rock’s most iconic band is unleashing another assault and bringing “The Hottest Show on Earth” to Hard Rock Live at the Seminole Hard Rock Hotel & Casino on March 17 at 8 pm. Backstage meet and greet packages are on sale now and general tickets go on sale on Friday, January 28 at noon.

KISS, the legendary American rock band formed in New York City in 1972, is one of the most influential bands in the history of rock and roll. Their career milestones are staggering. KISS is one of America’s top gold-record champions who recorded 37 albums over 36 years. Over thirty years of record-breaking tours around the globe include high-profile appearances at Super Bowl XXXIII, the 2002 Winter Olympics in Salt Lake City, the 2005 Rockin’ The Corps concert dedicated to our troops in Iraq and Afghanistan, and the 2009 finale of American Idol that boasted 30 million viewers. KISS was also nominated for induction into The Rock and Roll Hall of Fame in 2009.

The KISS legacy continues to grow, generation after generation. The unparalleled devotion and loyalty of the KISS Army to the “Hottest Band in the World” is a striking testament to the band’s unbreakable bond with their fans.

Sonic Boom, KISS’ first studio album in 11 years and produced by Paul Stanley, debuted at No. 1 on the Billboard Hard Rock Albums chart.

Tickets cost $169, $129, $99 and $79*; all seats are available at the Hard Rock Live Box Office, open Tuesday – Saturday from noon to 7 p.m. and on Sunday & Monday – only open on event days at noon. Tickets also are available at all Ticketmaster outlets online at www.ticketmaster.com or charge by phone: 1-800-745-3000. Doors open one-hour prior to show start time. *Additional fees may apply.

Tickets are also available at KISSonline