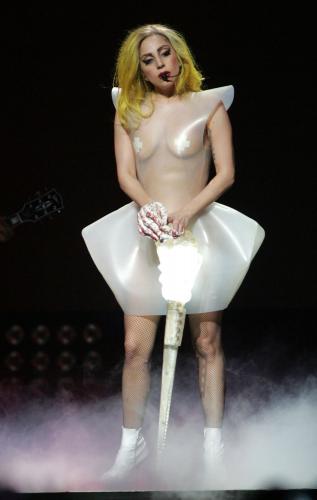 There is no doubt that Lady Gaga has made a name for herself and has created little monsters in both the young and the old. The American Airline Arena was filled with a mix crowd of fans from 6 to 69 all channeling Gaga in some fashion, sights of platform boots, green and pink wigs were everywhere.

The concert was a bit delayed but when she entered the stage, she made up for her tardiness and immediately she was forgiven as each song performed faded her tardiness. Her frame was a lot smaller than I expected. This petite artist walked on stage and the entire arena was ablaze with screams for Gaga.

She knows how to entertain and she puts on a show a show for her little monsters. From outrageous stage costumes and designs, theatrics, she did it all.

As many Americans struggle with self acceptance and self confidence, the international singing superstar provides an escape in the form of entertainment for people. It also sends a message which helps to ease a lot of pain and help young people today. Her message for the night was to be yourself, hence the song of acceptance for the night was “born this way”. Which gained favor from her most loyal fans and from members of the gay community as well. Some audience members described her performance Elton John-Modonna-esque.

Not so long ago the world knew nothing of lady gaga now she has taken over the airwaves with the hottest music in the clubs, her extreme at time radical fashion sense and on Forbes list as one of the worlds most powerful people. However before powerhouse status, gaga was a Miami regular with intimate concerts at the Fontainebleau Miami Beach hotel and on various Florida stages.

This was our first time seeing her perform live and as expected she delivered. Her performance was real-engaging and no lip synching as she reminded the audience. She worked hard at her choreography, she was extremely active on stage and made several commentaries throughout the concert.

Gaga continues to charm fans with her infectious style and music and will be embedded into America’s culture and one of the best entertainers of all time.