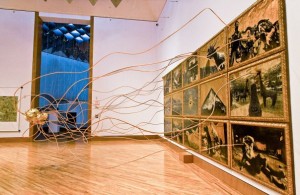 The Wolfsonian–Florida International University continues its series of exhibitions on Florida International University’s Modesto Maidique Campus with La Habana Moderna, to be presented in the Wolfsonian Teaching Gallery at The Patricia & Phillip Frost Art Museum. This small exhibition, on view from October 13, 2010 through April 24, 2011, examines how international cultural and commercial links contributed to the emergence of a modern identity for Havana in the decades before the Cuban Revolution.

The period between Cuba’s independence from Spain in 1902 and the overthrow of the Batista regime in 1959 witnessed not only rapid urban expansion in Havana, but also a range of efforts at national self-definition. Those endeavors produced a rich visual and material culture that advanced competing and sometimes conflicting notions of modernity. Intense engagement with modernist cultural currents from Europe, the United States, and other Latin American countries was evident in such fields as urban planning, architecture, and graphic design. At the same time, the economic power of a flourishing tourist industry made itself felt on both the built environment and the city’s self-representations, resulting in an emphasis on the picturesque, the historicist, and the exotic.

Drawing on The Wolfsonian’s collection, the exhibition presents a number of episodes that reveal the influence of Havana’s international connections. It consists of a variety of media, including photographs, architectural drawings, posters, periodicals, record albums, and advertising. Together, these items

permit visitors to glimpse some of the complexity of cultural life in a city shaped by both its status as a cosmopolitan metropolis and its role as a vacation destination for Americans.

La Habana Moderna is the second exhibition presented by The Wolfsonian with the Frost Art Museum’s collaboration. Supported with funding from the Andrew W. Mellon Foundation, the Wolfsonian Teaching Gallery provides an opportunity for FIU faculty members to work with museum staff in developing exhibitions from the Wolfsonian collection that serve as resources for teaching and learning, and advance scholarly research. For this exhibition, the museum has collaborated with Professor Marilys Nepomechie School of Architecture, FIU, who will teach a course titled “Hotels: Miami and La Habana at Mid-Century” in the Fall term. “The exhibition will give students in my course a unique opportunity to learn about La Habana in the first half of the twentieth century by interpreting and analyzing historical artifacts, ranging from architectural drawings to hotel advertisements,” Nepomechie said. “Not only will the exhibition serve our students, but it will be engaging for anyone interested in the development of the capital and its culture before the Cuban Revolution,” she added.