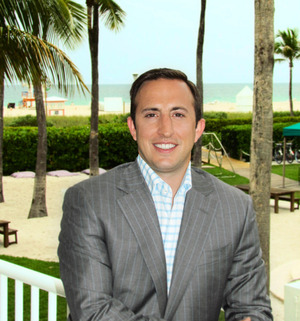 With an impressive career as part of the opening and transition teams for seven Kimpton hotels, Sean Flanigan comes to South Florida with enthusiasm and vision, ready to put his stamp on the guest experience and service offerings of Kimpton Hotels’ Surfcomber Miami, South Beach, as the hotel’s new general manager.

Flanigan, who assumed the position in May 2013, will oversee all property operations, sales and revenue, marketing, and management functions as he aims to maintain the highest performance levels, as well as guest and employee satisfaction. Flanigan’s responsibilities also include owner relations and creating a role for himself within the Miami and South Beach community.

“Surfcomber has undergone an amazing transformation since becoming a Kimpton,” said Flanigan. “It’s inclusive and welcoming style – in both service and design, and unique focus on being South Beach’s official ‘daylife’ hotel, have been a hit with visitors seeking an alternative destination experience. My goal is to continue to build on that success and bring it to the next level.”

Originally from Northborough, Massachusetts, a suburb of Boston, Flanigan began his career eight years ago at Kimpton’s Onyx Hotel in Boston, as a front desk agent before being promoted to supervisor. He went onto join Kimpton’s Nine Zero Hotel in Boston as front desk manager in 2006. From there, his accomplishments took him to the Hotel Monaco Alexandria in 2008, where he was part of the property’s opening team.

In fact, Flanigan has been part of the opening teams for several Kimpton hotels including Ink48 in New York, the Palomar Philadelphia, the Palomar Phoenix, EPIC, Miami – Kimpton’s flagship property in the market, and most recently, the Hotel Monaco Philadelphia, which opened last year and where Flanigan also served as hotel manager. Throughout, one of the responsibilities he most enjoyed was his role in training new team members.

Says Flanigan, “I love the guest-staff dynamic, and it is truly gratifying for me to help shape rapport by introducing new employees to the Kimpton culture and approach to service.”

Flanigan’s enthusiasm and management approach has been recognized with two awards from the Philadelphia Business Journal during his tenure as hotel manager at the Philadelphia Palomar – one for Best Place to Work, and a second with the hotel’s inclusion in the publication’s 2012 Hall of Fame.

Flanigan received a graduate degree in Hospitality and Tourism Management from the University of Massachusetts’ Isenberg School of Management. In his spare time, he enjoys carpentry – a hobby he picked up as a youngster. And though his name might suggest otherwise, Flanigan is actually Italian and enjoys trying his hand at cooking, as inspired by his Italian mother.