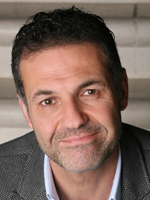 Meet the #1 New York Times–bestselling author of
The Kite Runner and A Thousand Splendid Suns
Khaled Hosseini
Discussing and signing his much anticipated third novel
And the Mountains Echoed
(Riverhead, $28.95) In this tale revolving around not just parents and children but brothers and sisters, cousins and caretakers, Hosseini explores the many ways in which families nurture, wound, betray, honor, and sacrifice for one another; and how often we are surprised by the actions of those closest to us, at the times that matter most. Following its characters and the ramifications of their lives and choices and loves around the globe—from Kabul to Paris to San Francisco to the Greek island of Tinos—the story expands gradually outward, becoming more emotionally complex and powerful with each turning page.

Ticket Guidelines: Vouchers are available for this event at Books & Books in Coral Gables, Miami Beach and Bal Harbour Shops. You can pick them up in person, order them online, or call any of these store locations and have one reserved for you to pick up at will call the night of the event. Your purchase of And the Mountains Echoed ($28.95 + tax) entitles you to receive (1) one copy of And the Mountains Echoed and also serves as your entry for (2) two people to Khaled Hosseini’s talk and book signing at Temple Judea.

And the Mountains Echoed will be published on May 21 and you may claim your copy of the book any time after publication at a Books & Books location, or at the event on June 19. Your voucher will be stamped to reflect whether or not you have claimed your book.

You must show your voucher and attached receipt to claim entrance to the event, so please remember to bring it with you that day. Books & Books is NOT responsible for lost or stolen vouchers.

KHALED HOSSEINI was born in Kabul, Afghanistan, in 1965. His father was a diplomat in the Afghan Foreign Ministry and his mother taught Farsi and history at a high school in Kabul. In 1976, the Foreign Ministry relocated the Hosseini family to Paris. They were ready to return to Kabul in 1980, but by then their homeland had witnessed a bloody communist coup and the invasion of the Soviet Army. The Hosseinis sought and were granted political asylum in the United States, and in September 1980 moved to San Jose, California. Hosseini graduated from high school in 1984 and enrolled at Santa Clara University, where he earned a bachelor’s degree in biology in 1988. The following year he entered the University of California, San Diego, School of Medicine, where he earned a medical degree in 1993. He completed his residency at Cedars-Sinai medical center in Los Angeles and was a practicing internist between 1996 and 2004.

In March 2001, while practicing medicine, Hosseini began writing his first novel, The Kite Runner. Published by Riverhead Books in 2003, that debut went on to become an international bestseller and beloved classic, sold in at least seventy countries and spending more than a hundred weeks on the New York Times bestseller list. In May 2007, his second novel, A Thousand Splendid Suns, debuted at #1 on the New York Times bestseller list, remaining in that spot for fifteen weeks and nearly an entire year on the bestseller list. Together, the two books have sold more than 10 million copies in the United States and more than 38 million copies worldwide.

In 2006, Hosseini was named a Goodwill Envoy to UNHCR, the United Nations Refugee Agency. Inspired by a trip he made to Afghanistan with the UNHCR, he later established The Khaled Hosseini Foundation, a 501(c)(3) nonprofit, which provides humanitarian assistance to the people of Afghanistan. He lives in Northern California.