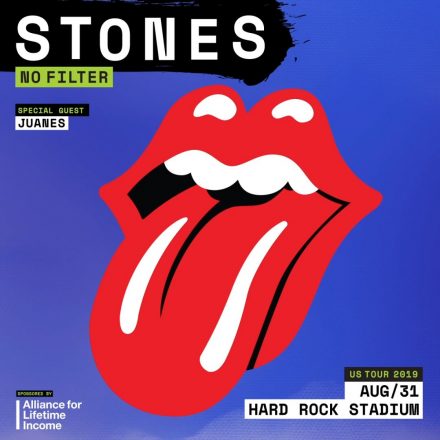 The Rolling Stones are excited to announce Juanes will join the North American ‘No Filter’ tour as guest artists for the final date in Miami on Saturday, August 31st at Hard Rock Stadium.

A multiple Grammy and all-time leading Latin Grammy winner (with 24), Colombian superstar and long-time Miami co-resident JUANES is Latin Rock’s leading global ambassador. Juanes has sold millions of albums around world, while notching 12 #1 singles and continually opening doors for the global growth of contemporary Spanish language music. Juanes is the only artist holding TWO of Billboard’s”Top-5 Latin Pop Songs of All-Time” – while Rolling Stone praised his most recent album “Mis Planes Son Amarte” with a rare 5-star review – declaring: “the stunner of a visual album [is] the most ambitious album of his career… he cares about creating timeless songs [with] meticulous craftsmanship in every note.”  Continuing to create critically praised new music, Juanes’ just released new single “Querer Mejor” Ft. Alessia Cara was hailed in NPR’s “Top Songs of May” as ‘a slow-burning ballad from one of Latin music’s most prolific and engaging creators.”  Juanes’ appearance on the Miami date of the “No Filter” tour will reunite the Colombian superstar with the Rolling Stones after he was the only artist to join the legendary band as an onstage guest during their 2016 AMERICA LATINA OLÉ Stadium Tour of Latin America.

The Rolling Stones will make stops in 15 cities across the US and Canada. The tour follows last year’s NO FILTER dates that have taken Mick Jagger, Keith Richards, Charlie Watts and Ronnie Wood back out on the road amassing rave reviews as they played to sold out stadiums throughout the UK and Europe.

THE ROLLING STONES – NO FILTER TOUR OF NORTH AMERICA & CANADA 2019

sponsored by – Alliance for Lifetime Income