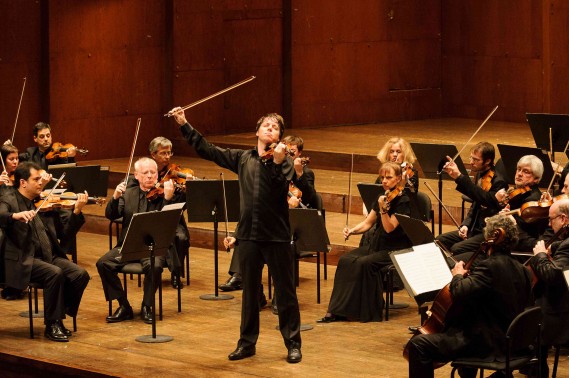 ACADEMY OF ST MARTIN IN THE FIELDS

Perhaps the world’s finest chamber orchestra, the Academy of St Martin in the Fields was founded by Sir Neville Marriner in 1958, bringing together London’s finest musicians to play among friends without a conductor in the Church of St. Martin in the Fields. What followed was a veritable revolution in the way the music world heard music from across the centuries, with impeccable performance practice married to a disarming humanity that made the orchestra and its hundreds of recordings staples of classical music.

A classical superstar in his own right, and one of history’s great violinists by any standard, Joshua Bell is not only the first American but also the first person to hold the post of music director of the Academy since Sir Neville founded it. Of Bell’s first tour with the Academy of St Martin in the Fields,Gramophone reported that “the audience reaction has been nothing short of rock concert enthusiasm.”  The Academy’s first recordings for SONY Classical under its new music director will be a complete cycle of Beethoven’s symphonies. The first installment, the Symphonies Nos. 4 and 7, was released in the spring of 2013.

*All programs, artists, ticket prices, availability, dates and times are subject to change without notice.Visit www.arshtcenter.org