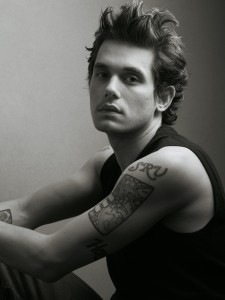 John Mayer’s fourth album, Battle Studies debuted at #1 in November 2009 and launched a world tour that has sold out arenas across the country and earned the musician some of the best performance reviews of his career. Summer dates for The Battle Studies World Tour, produced by Live Nation, have now been announced to kick off on July 16th in Charlotte, North Carolina. Special guests will include Train, The Avett Brothers and Owl City.

John Mayer comes to West Palm’s Cruzan Amphitheatre with special guest Owl City on Saturday, September 11.  Tickets are $63.50 and $43.50 for Reserved Seats and $30.00 for Festival Lawn.  There is also a special Festival Lawn 4-Pack of tickets available in advance for $99.00.  Tickets go on sale Saturday, June 5 at 10AM through www.livenation.com, charge-by-phone at (800)745-3000 or the PNC Bank Box Office at the Amphitheatre.

Since kicking off in February, the Battle Studies World Tour has repeatedly ranked among the Top Five on Billboard Magazine’s weekly Hot Tour list. Mayer’s current single, “Heartbreak Warfare” is his seventh Top Five radio hit, with the song reaching over 385 million. He has also earned a steady stream of performance accolades:

Mr. Mayer is an astonishing blues guitarist, both in his technical gifts and in his ability to make those gifts appear accessible. – New York Times

“It was an impressive display of his sharp guitar playing, appealing sing-alongs and personable wit, and the audience responded generously.” – RollingStone.com

“…for two hours, he thrilled fans with high-energy vocals, superb and innovative guitar playing, and light-hearted banter.”  – The Oklahoman

“He certainly has the scary-good guitar chops to try anything, whether it’s the smooth and effortless, funky vibe of ‘Vultures’ or the edgy rock build-up of ‘Assassin’ or the smoky blues-bar interlude on his cover of ‘Ain’t No Sunshine.’” – Grand Rapids Press

“Mayer was in good spirits, seemingly self-possessed by the music, grooving to his own guitar playing, enjoying the sound of his fellow musicians and singing like the words mattered to him.” – Minneapolis Star Tribune

“… there’s no question that the guy can play guitar. It’s not for nothing that such revered ax men as B.B. King and Eric Clapton have given Mayer their imprimatur.” – Philadelphia Inquirer

“Performing for more than 12,000 fans with a killer seven-piece band, Mayer has surely grown into his stage persona. He’s equal parts quirky and smooth, earnest and confident. And he has a hearty body of work to draw from.” – Dallas Morning News

Battle Studies was released in November, 2009 on Columbia Records and debuted at #1. It is his fourth studio album from the seven-time Grammy Award winning singer/songwriter/guitar player/producer and incorporates the warmth, melodies and simplicity of 70’s and 80’s California rock and pop. Battle Studies is a confessional, relaxed and liberated album recorded in a private home in California where Mayer lived and worked over the course of six months before wrapping at the famed Capitol Studios in Los Angeles. The album was co-produced by John Mayer and Steve Jordan.

ABOUT JOHN MAYER – The consistency with which John Mayer combines word craft and melody has earned him rarefied status in popular culture as a respected songwriter and musician. Since his acclaimed debut in 2001 with Room For Squares, each release has earned John Mayer additional accolades. Through 2003’s Heavier Things, his work with John Mayer Trio in 2005, CONTINUUM’s 2006 release and now, Battle Studies, John Mayer has established himself as a musician and collaborator who exceeds genre boundaries. The guitarist, vocalist and songwriter has earned seven Grammy Awards and sold nearly 12.5 million albums worldwide.

In May 2007, Time Magazine placed John Mayer on their Time 100 list of the most influential contemporary thinkers, leaders, artists and entertainers. For two consecutive years, Rolling Stone Magazine featured John Mayer on the cover of their annual “Guitar” issue – first with February 2007’s “The New Guitar Gods” round-up and then in May 2008’s “Living Guitar Legends” issue featuring Mayer with peers and icons alike.

Pairings with a range of artists are a defining trait of the musician whose collaborative streak is well-known. From rock to blues, hip-hop to jazz to country, Mayer has performed and/or recorded with Eric Clapton, BB King, Buddy Guy, T-Bone Burnett, Herbie Hancock, Dixie Chicks, Jay Z, Alicia Keys and Taylor Swift. In 2005, Mayer famously toured and recorded with power players Pino Palladino and Steve Jordan as John Mayer Trio, whose live album TRY! featured searing blues and rock. As on Continuum, John Mayer again took the helm as the co-producer of Battle Studies, his fourth studio album, was released on November, 17, 2009 and debuted at #1.

ABOUT OWL CITY – Owl City has become an international phenomenon over the past year with the release of his now platinum album Ocean Eyes (Universal Republic July 2009), #1 single “Fireflies” (now triple platinum) and several sold out headlining tours of the US, Europe, UK and Asia.   Adam Young started his career as Owl City in June of 2007 when he began making music in the basement of his parent’s house in Owatonna, Minnesota – a small town with roughly twenty-two thousand inhabitants.  Nearly three years later, thanks to more than 18 million profile views and more then 90 million plays on MySpace, this young man has become more than just an internet sensation.  “Fireflies” is now an international hit having made it to the #1 spot in 22 countries and Owl City’s latest single “Vanilla Twilight” seems to be on the same trajectory – having already gone gold and climbing the charts world wide.  In addition, he’s won the critics over with features out now in the New York Times, Rolling Stone, People, Entertainment Weekly, and USA Today, among many others.

Additional ticket and tour information is available at LiveNation.com.