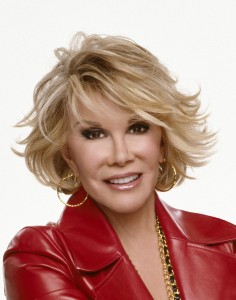 The ever energetic, high-spirited and ridiculously funny Joan Rivers spent some time talking with us this morning on her upcoming performance in Miami. She had me laughing from the introduction to the end of the interview. Of course, she is a comedian, what did you expect. She holds nothing back, she tells it like it is and if you don’t get it, too bad.  No need for a lengthy introduction, the interview says it  all.

PGM: I am glad you are performing in Miami and I am excited to talk to you about your performance at the Adrienne Arsht Center. Thank you so much for taking the time to talk with us.

PGM: Recently at the “Comedy Central Roast of Joan Rivers”, Kathy Griffin referred to you as her inspiration and a trailblazer for women. Do you feel that you have paved the way for female comedians?

PGM: And why is that?

Joan Rivers: Couldn’t care less, because I think, these people think that they have done something, its so boring and so stupid and so pretentious. I have a great career and I do what I do. I do my career and I never thought I was a trailblazer I never speak of myself in those terms. Its very sweet of Kathy who is my friend to say that.

PGM: You are a comedian, author, actress, playwright, television talkshow host, fashion show commentator and winner of Donald Trump’s Celebrity Apprentice. How do you manage to keep up with all of these activities in your life?

Joan Rivers: Oh whatever, yeah yeah….I just love the business and I think most of us, like Steve Martin is a performer, a comedian, an author. When you really look around most of us are writers and do other things also. Also, very few comedians these days are just comedians. We all write our own materials… most of us write books…  most of us do more than just stand up.

PGM: Is there a secret to your level of energy?

Joan Rivers: That’s just luck. I think my grandmother must have been raped by a Cossack. You know what I mean? My family has a lot of energy, in the family, I have an aunt that never stops. My sister and I laugh sometimes because the energy in the family is extraordinary. It’s also… I really think that anyone that turns down any opportunity in life is an idiot. My God if somebody says to you, “Do you want to go to Russia for four days?” “yes! yes! yes! yes!” Always yes. I never say no.

PGM: Is that because you only have one life to live?

Joan Rivers: Absolutely, I really do. I have done such amazing things in my life like a trip to Nepal, been to Russia in the dead of winter. How many people can say they have  spent four days in St. Petersburg, in real Russia with big heavy coats and boots, it was great. I’ve been to China, India and always on the spur of the moment things that people say, “you wanna go”,  and I say, “yes”.

PGM: Why have you decided to share your performance and work with Miamians? (Why Miami?)

Joan Rivers: Cause they are paying me.

PGM: Is that the only reason? You don’t love us that much?

Joan Rivers: I am a performer, I do my Stand up all around the country and when they call up and they say, “Do you wanna play Miami? You go, “great”. It’s fun, it’s a great area, there are a lot of young people. I hate the term hip, but it’s hip and I love it. Every time they say, “Do you want to go to Miami?” I say “yes”.

PGM: So share the secret, how much do they pay you?

Joan Rivers: Who knows. I have not seen a check in 15 years, it goes right to my account. It goes right pass my head.

PGM: You have had high and low points in your career and you seem to be a survivor. To what do you attribute that?

Joan Rivers: Move forward. Never, never dwell on the past. You can’t change the past, so for God’s sakes move on.

PGM: Looking back on your career, are there mistakes that you have made that you would do differently today? What would you say was your biggest mistake?

Joan Rivers: I don’t know, you know every choice has two paths out of it, so you don’t know. What would I have done differently? I don’t know. They offered me Oprah’s day time show before Oprah was offered it, and maybe I don’t think I would have been Oprah, so I don’t know what would have happened.

PGM: Do you think you would have made a greater success than Oprah has?

Joan Rivers: Oh no, I think that everything was right when she came along. She was smart, she was bright, she was African American, she was an all package.

PGM: Through your experiences, what wisdom would you pass on to someone who is trying to make it in this life?

PGM: What can we expect from your Miami performance?

PGM: So can you give us a preview?

Joan Rivers: No, it sounds so awful. No, but its fun. I think I have never been working better. I think I am really… I hate those terms, but i really…The only good thing about age is that it frees you to really say what you wanna say. I think if, my God, I have worked like this on a stage when I was 30 years old, how exciting that would have been. It is so much fun, I am having such a good time.

PGM: Have you done anything special while you have been here?

PGM: Well thank you so much for your time Ms. Rivers…..

Joan Rivers: You got the jokes, I love you…