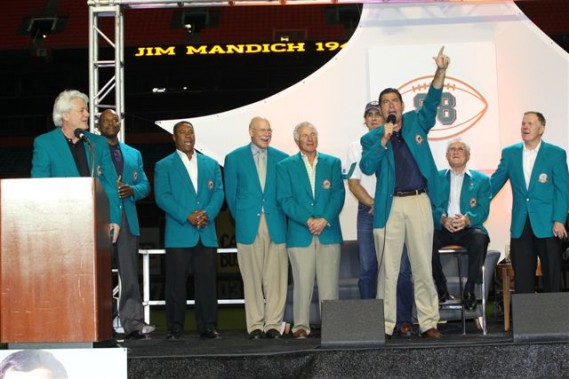 Longtime Dolphins player and South Florida broadcaster Jim Mandich today becomes the 22nd member to be inducted into the Dolphins Honor Roll. Mandich joins the prestigious group as a “Special Contributor” following a vote by the team’s Honor Roll selection committee. The announcement was made this evening by Hall of Fame Coach Don Shula at “A Celebration of Jim Mandich’s Life” at Sun Life Stadium in the presence of Mandich’s family, teammates, and friends. 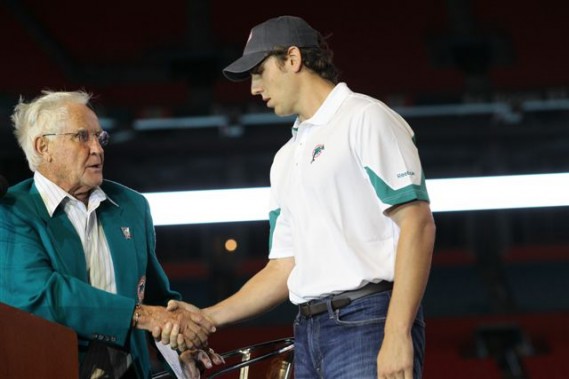 “Jim represented the Dolphins in so many great ways,” said Vice President/Special Advisor Nat Moore. “He first made his mark here as a tight end on the great Dolphin teams in the 1970s, where he was an inspirational leader of a group of players that achieved unparalleled success on the field. After that, he had a tremendous impact in the South Florida community as an advocate for ex-players and also raised much needed funds for cancer research through the Dolphins Cycling Challenge. And finally he brought his unique ‘Mad Dog’ approach to the radio booth, where his personal style and obvious love for the Dolphins made the team’s broadcasts memorable and brought together Finatics around the country. The induction of Jim into the Dolphins Honor Roll as a “Special Contributor” rightfully encapsulates his unequalled and wide ranging contributions to the Dolphins organization.”

Mandich was a member of two Super Dolphin Super Bowl championship teams, including the 1972 club that remains the NFL’s only undefeated team. In his eight seasons as a Dolphins tight end (1970-77), Mandich caught 121 passes for 1,406 yards (11.6 yards per catch) with 23 touchdowns. When he left the Dolphins, he ranked sixth in team annals in receptions, tied for second in touchdown catches, and tied for seventh in scoring. Even now, in current Dolphins history, he is second among tight ends in scoring, fifth in receptions, and second in touchdown catches. Overall, he ranks 29th in Dolphins team history in receptions and is tied for 23rd in club annals in scoring with 138 points. 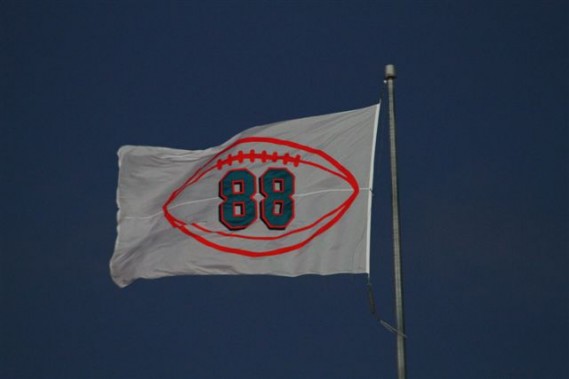 After a stellar career, Mandich went from the field to the broadcast booth. While 2010 was his fourth season teaming with Jimmy Cefalo and Joe Rose on Dolphins broadcasts, it was his 17th year as one of the team’s color analysts, having served in that role from 1992 through 2004 as well as 2007-10. In addition to his game broadcasts, Mandich hosted a daily talk show from 4:00-7:00 p.m. during the week on WQAM. He also served as a sports reporter for WPLG-TV and was a regular contributor to the station’s popular “Sports Jam Live” show that aired during the football season.

An All-American prep player from Solon, Ohio, Mandich attended the University of Michigan, where he combined great pass catching with sturdy blocking at tight end to make virtually every All-American squad including, Academic All-American. He caught 119 passes for 1494 yards and seven touchdowns in three-year career and was elected captain of team and most valuable player. Mandich was elected to Michigan’s Athletic Hall of Honor in 1994 and to the College Football Hall of Fame in 2004.