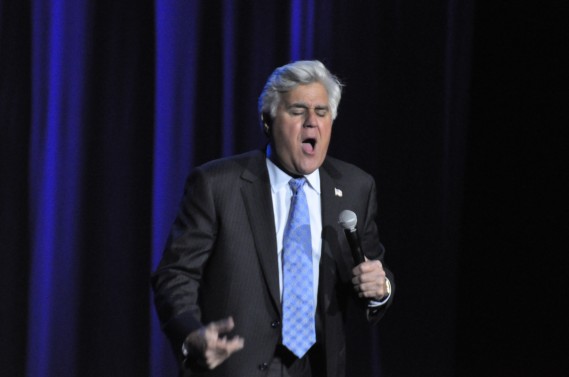 With only a bottle of water and a microphone, The Tonight Show host, Jay Leno delivered 90 minutes of clean comedy to a full and receptive auditorium at the Seminole Hard Rock Live in Hollywood Florida.

Jay Leno who is often referred to as ‘The Chin’, is a regular to South Florida often involved in charities in some capacity, filling in for other comedians or marshaling auto shows.

With his many visits, this was our first opportunity to see the comedian live and it was well worth it.

Initially it was an awkward moment, as we are used to seeing Leno on stage on television. The first part of the show was like watching TV which later dissipated when he began interacting with the audience, then the energy shifted to personal and engaging. He was not reading materials from a monitor instead he was working the audience and getting positive feedbacks.

The stage seemed a natural fit for Leno. The veteran talk show host seemed comfortable and at ease doing his stand up.

He made brief references to his passion for vehicles. Jay is an avid car collector with over 100 vehicles in his collection, and is a regular contributor to various publications offering his expert advise and insights on his most treasured toys.

If you are a fan of his nightly show, then you are familiar with the shows format where his content is based on mimicking the daily headlines. Not so much here. His material was a varied selection of stories that have been polished for his stand up gigs. He was feeding the audience with a good routine involving Paris Hilton’s shenanigans, how embarrassed he was by his parents when he first came into money, frozen embryos, obesity, man’s relationship between cats and dogs, and even the grotesque-a story about his exploding diarrhea.

Jay Leno was extremely animated with high level of hilarity without profanity. The chin gave us a belly full of laughter that will hold us until the next stand up or the tonight show with Jay Leno.