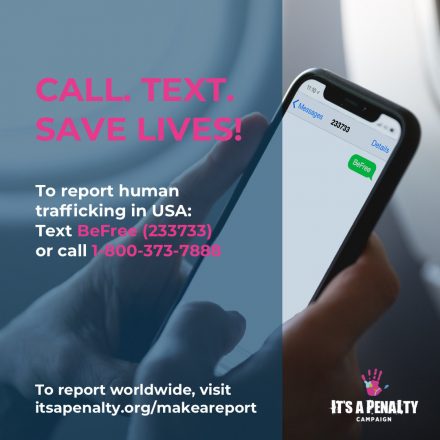 It’s a Penalty launched its eighth global Super Bowl campaign focused on harnessing the power of sport to prevent abuse, exploitation and trafficking. Launched in collaboration with founding partner, A21, It’s a Penalty’s 2020 campaign is dedicated to educating sports fans and the general public on what classifies as human trafficking and the subsequent penalties tied to those offenses. Knowing that large events, such as the Super Bowl, can lead to increased instances of human trafficking due to an influx of visitors, the campaign aims to inform people not only on how to identify exploitation and trafficking, but also how to take action and report these breaches of freedom.

THE EXTENT OF THE PROBLEM

“These figures show that trafficking is still a real problem across the globe,” said Sarah Carvalho, CEO, It’s A Penalty. “This campaign is designed to progress us towards our and our partners’ goal to eradicate abuse, exploitation and trafficking globally by 2030 together. We know from previous campaigns just how impactful they can be – including our largest yet in 2018 which reported that 81% of people felt more equipped to report human trafficking and exploitation after being exposed to the campaign.”

The 2020 campaign is supported by renowned American Football players like Aaron Rodgers, Nick Foles, Ryan Tannehill, Andy Dalton, Charles Harris and Jerome Baker. Each of the high-profile athletes lent their voice to help raise awareness via a 30-second campaign video which will be shown in-flight by American Airlines and British Airways on inbound flights to Miami with a potential to educate 39.2 million people worldwide. The film will also air in the terminals of MiamiInternational Airport for the entire month of January, along with being broadcast on some of the top television networks spanning across sports, news and lifestyle. If viewers suspect they’ve encountered a case of human trafficking, the campaign video will encourage them to call 305-FIX-STOP or text BEFREE (233733) to make a report.

To find out more about the charity campaign, its worldwide impact or to donate please visit http://www.itsapenalty.org/