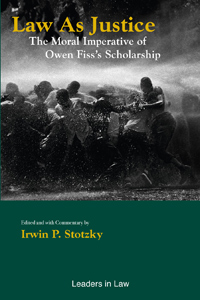 University of Miami law professor Irwin Stotzky presents his new book, Law as Justice: The Moral Imperative of Owen Fiss’ Scholarship. Stotzky is the Director of the University of Miami Center for the Study of Human Rights.  He received his J.D. from the University of Chicago Law School in 1974. He teaches in the areas of constitutional law and theory, criminal procedure, immigration law, and philosophy. For over three decades, he has represented Haitian and other refugees on constitutional and human rights issues in many cases, including several cases in the United States Supreme Court.  He has served as an advisor to the Alfonsin regime in Argentina on what steps to take, including human rights trials, against those who committed massive human rights abuses during the so-called “dirty war.”  He has served as an attorney and adviser to Haitian President Jean-Bertrand Aristide, and as an adviser to President Renè Preval’s administration.  In this capacity, he organized and directed the investigations into the massive human rights violations committed in Haiti during the illegal military regime’s reign, between 1991 and 1994.  This led to the first conviction for human rights crimes in the 200-year history of Haiti.  Since 2000, he has served as the Chairman of an international Presidential Commission to help Haiti confront its drug problems.