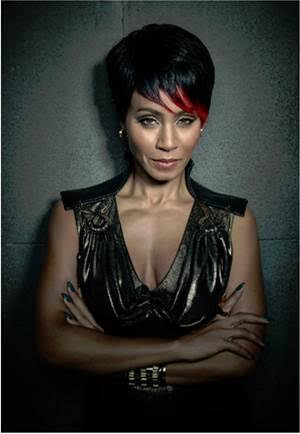 A talented actress, producer, director, author, singer-songwriter and businesswoman, Jada Pinkett Smith has approached her career with the utmost poise and versatility, capturing the hearts of fans and colleagues in the industry with every new project.

Born and raised in Maryland, Pinkett Smith studied dance and acting at Baltimore School of the Arts and North Carolina School of the Arts. Her resourcefulness and determination led her to a variety of professional opportunities, most notably the “The Cosby Show” spin-off series, “A Different World,” which launched her acting career on television. Pinkett Smith produced and starred in the critically acclaimed cable medical drama series “HawthoRNe,” which earned her a 2010 NAACP Image Award for Outstanding Actress in a Drama Series.

In 1993, she landed her first feature film role in “Menace II Society.” Her role opposite comedian Eddie Murphy in “The Nutty Professor” made her a household name.  Pinkett Smith’s acting career continued with her participation in “The Matrix: Reloaded” and “The Matrix Revolutions.” In 2004, she won the Academy of Interactive Arts and Sciences, USA Award for Outstanding Achievement in Character Performance – Female for her role in the video game “Enter The Matrix.” In 2005, she was featured in the animated movie “Madagascar” as the voice of “Gloria,” the hippo. She was also featured in the franchise’s two subsequent films, “Madagascar: Escape 2 Africa” and “Madagascar 3: Europe’s Most Wanted.”

She earned global praise for writing the children’s book “Girls Hold Up The World,” which landed on the New York Times Best Sellers list. She and husband Will Smith founded The Will and Jada Smith Family Foundation, dedicating their organization to education.

Her executive producer credits include the 2010 film “The Karate Kid,” which starred her son, Jaden, and Jackie Chan, and the documentary “Free Angela and All Political Prisoners,” about political activist Angela Davis. She currently is an executive producer on the highly successful syndicated talk show “The Queen Latifah Show,” which will premiere its second season in September 2014.

Along with her husband, and mogul Shawn “Jay-Z” Carter, she was an executive producer on the Broadway musical hit “Fela.” Smith’s Overbrook Entertainment and Carter’s Roc Nation have joined forces again this year on the highly anticipated remake of the 1982 musical film “Annie,” scheduled to hit theaters Christmas 2014.

Pinkett Smith contributes much of her free time to humanitarian efforts, helping to raise awareness on issues such as human trafficking in the United States. Her social initiative, “DontSellBodies.org,” has been recognized by the U.S. Department of State, and she was invited by Secretary of State John Kerry to testify against human trafficking before the U.S. Congress in 2012. She also serves on the advisory board of Gucci’s empowerment initiative, “Chime for Change,” which campaigns for improved education, health and justice for women and girls worldwide.

Do you have any input in wardrobe?

What’s your favorite outfit so far?

Jada Pinkett Smith: What has my favorite outfit been?  I think it would probably have to be the one that I wore when I went to see Maroni about returning Penguin to me.  And it’s the first time I realized that Penguin was alive, and the first time I see him after seeing him in Maroni’s restaurant, and think it was like teal.  It was this beautiful kind of antique fabric, but yet it had this kind of punk rock edge to it with the trim that she used, which was this kind of spiked teal leather and I just thought it was just a beautiful mixture of the old and the new and even with the shape of it, it was high waisted, but yet it had this kind of like warrior-esque, but quite feminine top that went to it.  It was pretty cool.  It was really quite beautiful.  Not that comfortable to wear, but beautiful.

What’s been your favorite scene so far?

Jada Pinkett Smith: Yes, I think that was one of the reasons why the role was so interesting to me was because it was something that Bruno really wanted a partner in creating this Fish Mooney character, and I love female gangsters.  I just love them.  I think that they’re really interesting characters and interesting people, and there’s one, Griselda Blanco, who I had studied, and I also love the character from Sunset Boulevard.  I did kind of a mish-mosh of those two because Bruno had some suggestions, and it’s coming together, and I was like wow, I would really love to do a mixture of these two women, because the one thing I love about the super villains, and Gotham, is that they’re always so colorful.  I really wanted her to be grounded, but also have quite a flair.

Are you enjoying being a part of a comic book universe?

Jada Pinkett Smith: Oh yes.  I am, I am enjoying it.  I love comic books and so it’s been a real pleasure to be able to participate in this way for sure.

What have you added to this character that was not originally scripted?

Jada Pinkett Smith: I would say, some of her fishes, kind of like a [indiscernible] and just a lot of her mannerisms, and just some of those little added attitude phrases that Fish has.  I would say that would be pretty much what I would add.  Thank goodness I have a lot of room on set just because Bruno and the writers know that we’re still trying to find the voice of this character, so I have a lot of room to improv at times when it comes to Fish.  That’s been fun as well.  Just adding those little flavors that I think make Fish Mooney Fish.

As a new Twitter user, how’s your experience thus far?

Are there any challenges doing this character?

Jada Pinkett Smith:  I think some of the challenges, and that’s a really good question because it’s, as I was saying before, I love how colorful Fish can be, but at the same time, you still want her to be relatable.  You know what I mean?  You still want people to be able to look at this woman and might not necessarily know her story, but be able to relate to her.  I think that this world of Gotham sometimes in finding where you need to be emotionally, or how grounded you need to be in a scene or how far you can actually go with the color of the Fish Mooney sometimes tend to be a bit challenging.  That’s always a see-saw.  It’s always trying to find that balance.  But, I would say that aspect is the most challenging of just keeping that flair, but at the same time, trying to keep her grounded and real.  That can be really challenging.

As the show developed, there are many faces of Fish, was this intended?

Jada Pinkett Smith: Yes.  You know the thing about Fish Mooney, is that you will see, especially in the upcoming shows, you will see the many faces of Fish Mooney.  I think Fish Mooney, this is a woman who, because of her background and because of who she really is, really has taken it upon herself to do a lot of cover-up.  So, I think she has all of these different kinds of personalities that she picks and chooses to use during certain times. You have this kind of sophisticated Fish of what she considers to be sophisticated.  What a sophisticated woman sounds like.  What a sophisticated woman looks like.  But then, there are times when she loses her cool and you kind of see her original essence.  Which can get a little gutter.  Then sometimes, when she has to be influential with men you’ll see her put on her little sexy kitten voice, which is coming up.  This is a woman who has created all of these different masks to fit different times, just depending on what she’s trying to do at that particular point in time.  It’s interesting, because when you watch people in real life, you’ll see that happen often.  She just does it in a more extreme way.

Do you get notes from your family about your role?

Jada Pinkett Smith: No notes.  That’s the wonderful thing.  No notes.  You just go good job, that’s it.  We stay away from notes.  Yes.

Is there a character that you would like to play in the future?

Jada Pinkett Smith: I think there’s a character coming up in Magic Mike that I’m really happy about, that is totally different from anything that I’ve done thus far.  Once again, this woman is strong in a much different way also, and I think that from the response that we’ve been getting in regards to the character that I play in Magic Mike, I’m really happy in how that turned out and she’ll probably end up being one of my favorites as well.

Can you talk more about the sexuality of your character and what’s that been like?

Jada Pinkett Smith: It’s been great.  I think the Fish Mooney character anything pretty much goes as far as she’s concerned by any means necessary.  It’s kind of her motto, but I definitely think that Fish doesn’t discriminate when it comes to her sexuality.

What did you find so fascinating about this role?

Jada Pinkett Smith: Well because Gotham is so mysterious.  There’s this kind of undertone to Gotham, the idea that this city itself is kind of this underbelly and it’s just like, what is going in these alleys?  What’s going on in these so called high rises?  What is happening?  Why is it that this place has some of the most incredible villains and then you have one of the most beloved super heroes, which is Batman and comes from this kind of dark, gritty atmosphere?  I’ve just felt that Gotham, itself, has been such a mystery, and I’ve always been drawn to it.  Like, what is Gotham?  What is the city about?  Who’s there?  Why is it this place?  What is it about this place?  So, that has always fascinated me about the Batman story.  It’s just his backdrop, which has been Gotham.

Was there a particular scene or episode where you felt like you really clicked with Fish and just like became her, or did you already kind of have her down before you stepped onto the scene?