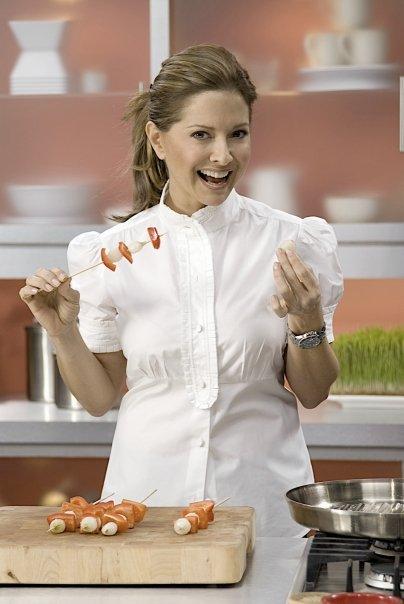 Colombian-American television personality and Restaurateur Ingrid Hoffman is making her mark in the culinary industry. The Host of Food Network Series, Simply Delicioso as well as the Spanish-language cooking and lifestyle show, Delicioso has introduced the public to her wide array of recipes as well as her cooking originality. With a third book in progress and a cookware line just recently released, Ms. Hoffman is continuing to impress the public with her savvy business attitude and her ability to seize the opportunities that come her way. Besides her success as a restaurateur and a business woman, Ms. Hoffman also finds the time to give back to her community. Her philanthropic work with Amigos for Kids is admirable. It allows her to give many underprivileged children the opportunity to step into the culinary industry while simultaneously obtaining an education. Premier Guide Miami’s Marie-Junie Pierre got a chance to conduct a one on one interview with the Restaurateur about her experience as a restaurateur and her future business prospects.

PGM: How did you first get started in the culinary industry?

IH: I never really wanted to get into the first culinary industry. I did everything I could to get away from it. Growing up, I had to work for my mom during the weekends and during vacation in order to earn money therefore I was exposed to the culinary industry at a very young age. I always tried to get away from this industry but it always seemed to find me somehow and here I am.

PGM: How have those experiences shaped your culinary skills?

IH: I think those experiences definitely enhanced my techniques but cooking in my opinion is one of those things that one does not need a manual for. Even if a dish does not come out as anticipated initially, there is always the understanding that it will come out better next time. I love the adventure of playing with food and creating a recipe without a fixed plan. It’s like an adventure of playing with flavors, colors and textures.

PGM:  Tell me a little about La Capricieuse, the restaurant which you opened up in 1990. How was that experience?

IH: I really enjoyed it at first but then I woke up one day and realized that I was sick and tired of owning a bunch of leases and inventories. I no longer wanted to deal with the business aspect of it.

PGM: Do you have any particular people in the culinary industry that you look up to?

IH: I definitely love Martha Stewart. I certainly enjoy watching Julia Childs as well as Anthony Bourdain. I also love Bobby Simmons. It is really hard to pin point because there are certain things about each one of them that I like.

PGM: What projects are you working on right now? What can we expect from you in the near future?

IH: I am currently working on my third book and I am launching my Pots and Pan line, which is coming out in November on HSN. I am very excited about. The thing that I am most excited about is my philanthropic work with Amigos for Kids which is an organization that brings awareness, especially within the Hispanic Community, about how to make better eating choices. I am working on a project for launching a restaurant in which I am going to report a lot of homeless people that we are training specifically to start working in kitchens and I collaborate with the students in a high school in New York City in a Pilot Program that teaches high school students how to cook and how to begin their professional career while still being high school students in the culinary field.

PGM: I think your philanthropic work is really commendable. Thank you for speaking with Premier Guide Miami this evening. We wish you the utmost success.