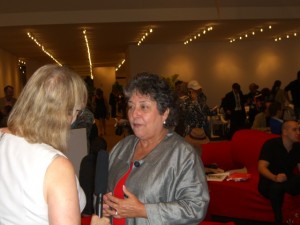 Art Basel Miami Beach is said to be the King of all art shows in the USA, and indeed it has earned its title. This year’s fair ended with positive reactions and abundant optimism from collectors, dealers and general supporters of the arts.

Galleries and dealers were very pleased with the unexpected interest of visitors, and surprising sales at the fair. Prices were reduced to attract buyers.

Staging a fair of this magnitude takes a lot of planning and preparation on the city’s part, and reflects positively on Miami and Miami Beach’s  economy, especially now. There is a sudden influx of tourists and snow birds during this time.

Restaurants, hotels, local transportation and just about every industry in the area welcome this celebration, as it helps to boost the economy, and provides jobs at least for a few days. The taxi drivers are happy as there are more intoxicated party goers for them to transport, and visitors who tour the city or attend satelitte fairs.

The rates of hotel rooms in and around the main fair were increased considerably. The Standard, W-South Beach, and the Delano & Raleigh hotels were among the top hotels for visitors and major celebrations.

One major contributor to the Miami Beach community during Basel was Centerplate. Centerplate is a hospitality company which crafts and delivers extraordinary entertainment experiences in more than 260 prominent sports, entertainment and convention venues across North America. Centerplate has provided services to Super Bowl XLII, the Belmont Stakes, key events for the Democratic and Republican National Conventions, the South Beach Wine and Food Festival, and six official Presidential Inaugural Balls.

Centerplate brought on over 500 new staff to help facilitate all facets of culinary and service execution, offering both innovative menu concepts and the best of Miami’s gourmet traditions to the upper echelon art scene and exclusive celebrity clientele that included Sylvester Stallone, Calvin Klein and Pharell Williams. Centerplate served over 60,000 meals to the exhibition’s 40,000 guests, with efforts ranging from catering the exclusive Vernissage gala held on December 2 to providing gourmet culinary offerings at each of its restaurants throughout the four-day event.

“We are dedicated to the Miami community and are proud to have supported the local economy with hundreds of new jobs for the eighth edition of Art Basel Miami Beach,” said Eric Bayne, Centerplate’s General Manager of the Miami Beach Convention Center, who traveled to Switzerland to experience the original event, allowing him to help craft the distinctly American counterpart. “Our inspired culinary offerings were a perfect fit for Art Basel’s arbiters of taste.”

ABMB is also one of the largest arena for networking. This is where future shows are planned, connections are made and collaterals is exchanged. It may have been a bit difficult this year, depending on who you are, as the major parties were reduced to private dinners, and of course VIP or invited guests only parties. Parties galore were hosted throughout the city by big names like Lance Armstrong, Val Kilmer, Sylvester Stallone, Dr. Dre, Paris Hilton, Calvin Klein, Russell Simmons, Pharell Williams and the Olsen twins, and for these big names, you had to be on the list to gain access. With that you had to be lucky, a friend of a friend, know a PR contact who likes you, have a big name yourself, and maybe have some money left in the bank to bribe someone, or as a last resort, be a faker. With that said, all those private engagements impacted the city in a big way, and the city of Miami beach welcomes it.

Art Basel Miami Beach 2009, attracted more than 42,000 visitors and was reported as a bounce back. It is one of the largest tourist drawer to Miami Beach. In an interview recently conducted with the Mayor of Miami Beach, she seemed optimistic of the turnout of the the fair and the impact it has on the Miami area.
Here is a short interview with Matti Herrera Bower, Mayor of Miami Beach.

PGM: How involved is the city with Art Basel Miami Beach?

MHB: The city has been involved in the way it is going to happen, how the city is going to look and the plans on how the traffic is going to be. We play an intregal role in what’s happening here because we expect a lot of people and we have to be prepared.

PGM: Why is it important for Miami to host Art Basel?

MHB: Art Basel is a wonderful fair to have. It puts us on the map of arts because it is the premiere art fair in the world and it creates an ambience and perception that it is very good for Miami Beach and Miami as a county. But for us also it hit’s the economy, people also have to book hotels, have to eat at restaurants, to shot and to look around. That is something that is particularly good for the county and especially Miami Beach.

PGM: Do you think Art Basel will remain in Miami Beach?

MHB: Art Basel puts Miami on the world map of arts. We worked hard in the beginning . It has been 8 years that they are here and we keep making sure that they keep coming back. In Miami Beach we really take special care about the arts. Here in Miami Beach we have never cut budget on the arts, even when everyone has to cut budget in other areas our budget stays the same. We are always looking forward to creating more art and making sure that we stay on the line.