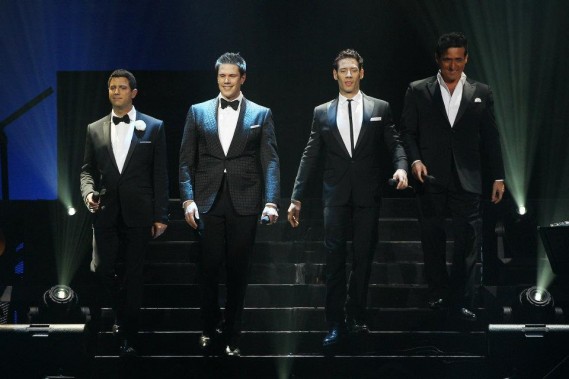 Hip hop, pop, reggae, and rock are all great genres of music that make us feel good, and want to get up and dance. Classical music on the other hand, speaks to our emotions and to our soul-it gives us goose bumps and captures our attention to the very end.

British pop operatic sensation, IL Divo hijacked the Hard Rock Live, in Hollywood, Florida with a sold out auditorium and delivered an unforgettable concert. Their sound and performance were vital and fresh for the audience. During their performance, there were thunderous applause and standing ovations in the auditorium. Ironically, there happened to be a thunderstorm that night, with echoing claps of thunder that was heard throughout the building. This made the gentlemen wondered if it were always like that? Gentlemen, welcome to South Florida.

The quartet was created by reality TV mogul and former American Idol judge, Simon Cowell. The very talented and diverse group members are from various parts of the world; Switzerland, USA, Spain and France. They are David Miller, Urs Buhler, Carlos Marin, Sebastien Izambard. This international union and varied backgrounds have contributed to their global success.

Just when we thought groups and boy bands were fading, IL Divo popped on the scene offering something different delivering passion through their distinctive voices with a mix of pop, opera and classical music; something that sets them apart from the rest.

Not to be confused with the Italian movie, IL Divo which portrays the life of former Italian prime minister, Giulio Andreotti that gained very little success outside Italy. IL Divo is a musical group that has invaded the US music charts, and captured the hearts of millions of devoted fans while amassing a resounding amount of awards and accolades. The vocal group has earned multi-platinum status, with over 25 million album sales, 150 gold and platinum disc and over 2 million concert tickets. They have become a global success.

Watching them on stage, they appeared to be a unified group, with a genuine connection, and a feeling that they truly enjoyed what they were doing. They communicate emotion, and passion in such a way that one almost forgets that this was a live concert in a hall filled with other people. It felt like an intimate moment.

Picking the best of the best from their six albums, which include Ancora (Ancora is the only crossover classical album to enter the us billboard top 200 at number 1), Siempre, The Promise, they incorporated all their new materials with the old, and delighted fans with a heart melting concert.

In this 2012 IL Divo Tour, they delivered an emotional and powerful performance in both French and English. Even if you understood nothing in French, their voices were powerful enough to melt your heart and carry the message.

The group appeals to all age groups, and the mix of audience members was proof. Their performance was thorough and harmonically stimulating. They were a joy to listen to.

IL Divo, operatic fusion prefers not to be labeled or defined. Instead they describe themselves not as a classical, operatic or pop group, but as a unifying force creating musical magic with materials rooted in classical string, piano music, pop, musical theatre, opera, and heavy metal.