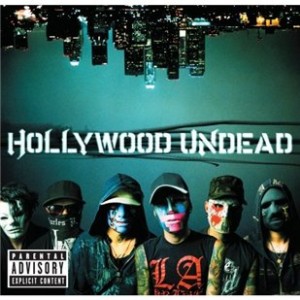 Hollywood Undead meld the rap-rock aggression of Limp Bizkit, the brutally honest self-examination of Eminem and the objectionable content of gangster rap. Hailing from Hollywood, California, this six-piece unit performs under pseudonyms and wear masks on stage to protect their identity. Embodying the dark underside that lies beneath the phony glitz of Hollywood, the band’s songs often revel in the desperate ugliness of the city’s less-glamorous elements. Gleefully amoral, Hollywood Undead demonstrate a penchant for casual sex and an obsession with angst-fueled diatribes leveled at their enemies.  They are currently touring in support of their soon to be released new album American Tragedy, featuring the single “Hear Me Now.”