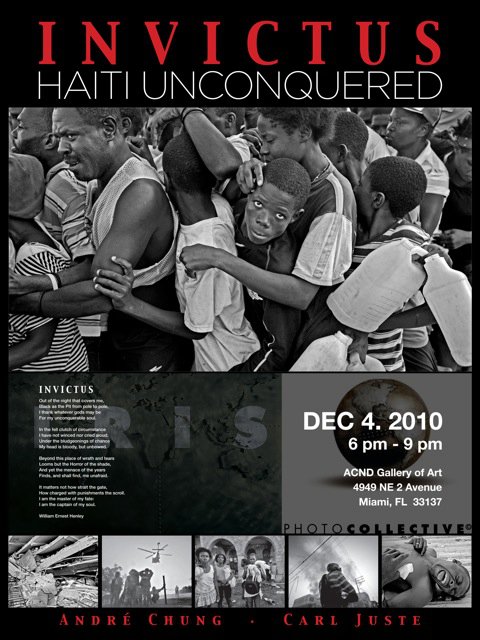 Just a few blocks north of Miami’s Design District and at the hub of Art Basel week events, the ACND Gallery of Art will host an Exhibit Event and Conversation lead by award-winning Miami Herald Photojournalist Carl Juste and Andre Chung of the Iris PhotoCollective.

The Conversation will bring together high school and college students, photojournalism professionals, educators, and any other members of the community who support the visual arts and wish to share ideas that will help inspire and motivate aspiring photographers.

Admission is free and the gallery will provide complimentary parking. Registered guests are welcome to attend the event and continue their walking tour from the school’s Buena Vista location and into Design District a few blocks away. To pre-register email news@acnd.net.

Along with Andre Chung of the Iris PhotoCollective, Carl Juste will discuss the power of visual storytelling within the context of his exhibit that opens this week at the ACND Gallery of Art. Large 30×40, B&W images document some of their award-winning images of Haiti while covering the 2010 earthquake and its aftermath.

“During the earthquake the rich were impacted, the poor were impacted.  No one was segregated and for the first time at least that I can remember, the plight of the Haitian became the plight of the world.  And maybe out of all of this pain and all this suffering, there is a rebirth, but not only a rebirth of a nation, of an island nation, but of ourselves.” – Carl Juste

Discovering photojournalism and also ourselves will serve as the goal of the December 4th Conversation.

Free and open to the community and media.  Pre-registration is encouraged by emailing news@acnd.net

Carl Juste will display photographic works from his latest project, “Invictus: Haiti Unconquered” inspired by his work covering the 2010 earthquake in Haiti and its aftermath. Photography and poetry merge as the William Ernest Henley reference parallels the exhibit’s dramatic and compelling array of black and white images. Andre Chung‘s work will be presented on December 4, 2010.