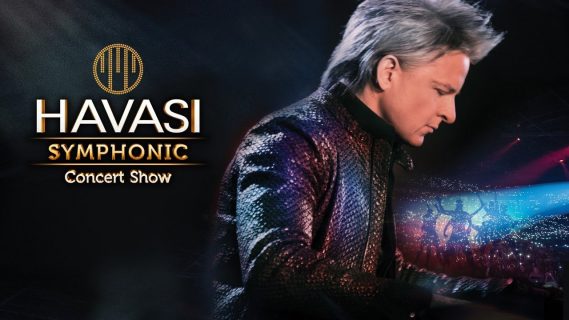 The North American debut of the Havasi Symphonic Concert Show has been rescheduled from March 21, 2020 to October 24, 2020 at 8 p.m., Hard Rock Live, Seminole Hard Rock Hotel & Casino Hollywood.  Tickets for seats previously purchased will be honored on the new date.

Classically trained virtuoso pianist Havasi—a graduate of the Franz Liszt Academy of Music—has become a true phenomenon.  He has performed in the Wiener Stadhalle in Vienna, the Sydney Opera House, the Wembley Arena in London and the Mercedes-Benz arena in Berlin, among others.  His shows sell out in record time everywhere in the world, with his tour in Europe topping Billboard Boxscore and Pollstar rankings for global ticket sales. He has sold out more than 150 concerts worldwide.  Recently filling the Budapest Arena to its seat capacity in his native Hungary four times over a single weekend totaling 46,000 fans.  And more than two hundred million viewers on Chinese Central Television were thrilled by his performance with the Shanghai Symphony Orchestra at the Shanghai World Expo Center.

And if those weren’t enough accolades, Havasi has even been documented by Guinness World Records as the Fastest Pianist in the World.  Havasi’s unique musical style blends the depth and discipline of classical tradition with the dazzling diversity of world music, soft rock and the spectacle of high-energy performance.

“I was most definitely a student of the classical realm of music,” said Havasi, “But I wanted to bring new audiences to the concert halls and bring classical instruments into mainstream entertainment.  We wanted a spectacle for the ears, the eyes, and the mind to transport audiences through a musical journey.  That’s why the collaboration with Brian and Gilles was so important.”

Havasi is referring to creative director Brian Burke, who has worked with artists such as Céline Dione, IL Divo, and on America’s Got Talent, and to Gilles Papain, video light designer & production manager of Cirque du Soleil, the Marseilles Opera, and Ballet de Monte Carlo.  The collaboration has resulted in the Havasi Symphonic Concert Show—already hugely successful in Europe—making its North American debut at Hard Rock Live, Seminole Hard Rock Hotel & Casino Hollywood, on March 21, 2020 at 8 p.m.

“The show is intended to provide different moods for the audience in a memorably intense experience, like a thrilling ride on a rollercoaster.” said Havasi, “And the all new Hard Rock Live, with its great sightlines and state-of-the-art acoustics, is the ideal venue for both our performers and for the audience.  I’m really looking forward.”

The program will feature 100% original composed works by Havasi—innovative music guaranteed to be unlike anything United States audiences have heard before.  “Fresh,” “passionate,” and “entertaining” are all words aptly used to describe the Havasi Symphonic experience.  And with not only piano, but orchestra, choir, world music soloists, the latest technology in sound, stage, lighting and video projection—plus rock drums on the same stage—another word would be “spectacle.”

“We were inspired by this extraordinary talent,” says S. R. Tommie, Founder and President of Redline Media Group. “Through this collaboration with Havasi and Redline Media Group, our goal remains delivering an unrivaled musical experience across North America with the Symphonic Concert Show for many years to come.”