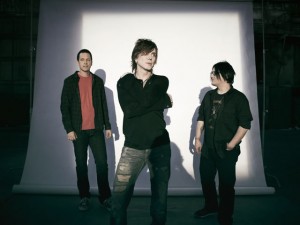 Goo Goo Dolls come to Miami on Saturday, August 14th, 8PM at Bayfront Park Amphitheater.  Special Guest Switchfoot is also on the bill with additional support to be named later.

The Goo Goo Dolls, formed in 1986 in the crumbling rust belt city of Buffalo, New York, probably started for no better reason than to kill time, make some music, and hopefully get a few free beers from the clubs where they were lucky enough to get a gig. Then, as lead singer / guitarist John Rzeznik says, “Somewhere in there we sort of figured out how to write songs.” The band’s third album, Hold Me Up, released in 1990, showcased the sound of the band that would later be refined on their next two releases, Superstar Carwash and A Boy Named Goo. It was the latter of these two releases that landed the band their first hit song with “Name” in 1995. A Boy Named Goo went on to sell over two million copies, and the band toured extensively around the world to support their newfound success. But it was in 1998 that the Goo Goo Dolls proved that they were not destined to be a “one hit wonder.” In that year Rzeznik penned “Iris,” which originally appeared on the City Of Angels soundtrack, and was also included on the band’s sixth album Dizzy Up The Girl. “Iris” spent almost a year on the Billboard charts, including a phenomenal 18 weeks at #1. And that, as it turned out, was just the beginning. Dizzy Up The Girl also contained the hits “Slide”, “Black Balloon” and “Broadway,” all of which were top ten hits on the Billboard charts. Most bands that were around in 1986 have come and gone. A lot of trends came and went. But through it all the Goo Goo Dolls have been able to survive and stay relevant. They have grown beyond their influences, and have spent their lives creating and performing great songs. And at the end of the day, that’s what it’s all about — songs. So as the trends come and go, or when the world gets caught up in the latest celebrity gossip, there will always be people hungry for songs that speak to them. Those are the people the Goo Goo Dolls are talking to.