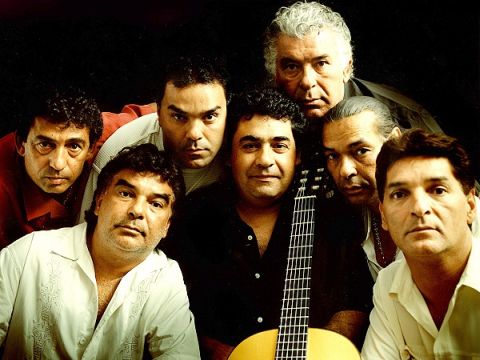 The Gipsy Kings are largely responsible for bringing the joyful sounds of progressive pop-oriented flamenco, called “Sevillana” in Spain, to the world. Their total album sales worldwide now exceed 18 million and they are considered the world’s best-selling music group from France in history, according to their website.

The band started out in Arles, a village in southern France, during the ’70s when brothers Nicolas and Andre Reyes, the sons of renowned flamenco artist Jose Reyes, teamed up with their cousins Jacques, Maurice and Tonino Baliardo, whose father is Manitas de Plata. They originally called themselves Los Reyes and started out as a gypsy band traveling about playing weddings, festivals, and in the streets. Because they lived so much like gypsies, the band adopted the name the Gipsy Kings.

In 1986, the band took on a more contemporary edge, combining their traditional songs with sounds from the Middle East, Latin America, North Africa combined with a hint of rock. In 1987, they released “Djobi Djoba” and “Bamboleo” and scored two smash hits in France. Their eponymous debut album, released later that year, introduced the world to “Rumba Gitano,” the sound of South America’s rumba rhythm married to flamenco guitars. The album made the Top Ten album charts in 12 European countries including England. In 1989, they held an SRO concert at the Royal Albert Hall, where the Gipsy Kings performed with some of the world’s biggest pop stars including Elton John and Eric Clapton. To top off their great year, the Kings’ debut album spent 40 weeks on the U.S. charts and went gold, becoming one of the few Spanish albums to do so.

Tickets cost $89, $74, $59 and 49*; All seats are reserved and available at the Hard Rock Live Box Office, open Tuesday – Saturday from noon to 7 p.m. and on Sunday & Monday – only open on event days at noon. Tickets also are available at all Ticketmaster outlets online at www.ticketmaster.com or charge by phone: 1-800-745-3000. Doors open one-hour prior to show start time. *Additional fees may apply.