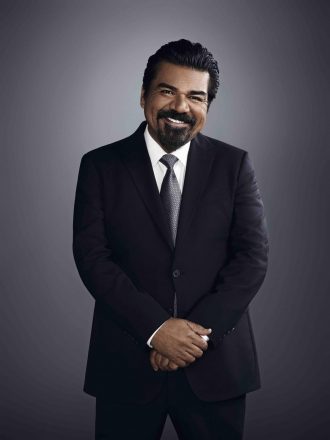 Lopez’s multi-faceted career encompasses television, film, stand-up comedy and late-night television. Lopez is currently on his stand-up comedy tour, “The Wall World Tour” in arenas across the country. He also recently completed “The Comedy Get Down Tour,” with Eddie Griffin, D.L. Hughley and Cedric the Entertainer. The comedians recently wrapped a BET scripted comedy series based on the tour.

In 2018, Lopez released the film “El Chicano,” alongside Raúl Castillo, Aimee Garcia, and Emilio Rivera. He is also set to star in the faith-based film, “Walking With Herb” opposite Edward James Olmos and Mary McDonnell, and the crime thriller, “The Tax Collector,” with Shia LaBeouf and Lana Parrilla.

On television, Lopez starred in and produced “Lopez” for TV Land, “Lopez Tonight,” a late-night talk show for TBS and the groundbreaking hit sitcom, “George Lopez.” The latter ran for six seasons on ABC and remains a hit with viewers in syndication on both broadcast stations and cable’s Nick at Nite, ranking as one of the top-rated shows on the network and among the top five comedies and top 20 weekly programs in syndication.

Lopez has received numerous accolades throughout his career, including Grammy Award nominations for Best Comedy Album for “Tall, Dark and Chicano” in 2009, “El Mas Chingon” in 2006 and “Team Leader” in 2004. Lopez was also the focus of the award-winning documentary, “Brown is the New Green: George Lopez and the American Dream.” In 2005, Time Magazine named Lopez one of the 25 Most Influential Hispanics in America. That same year, the Harris Poll named him one of the Top Ten Favorite Television Personalities.