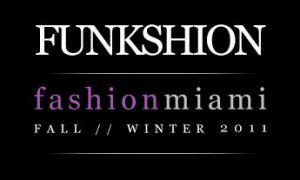 8PM Richie Rich will host a kick-off dinner party at EDEN restaurant on 23rd and Collins. The public can attend but would need to book the table at the restaurant.

Runway fashion shows followed an after party in the tents until Midnight.

2hr live fashion show made for TV with LIVE performances.

As a follow up to last year’s Earthquake Relief Show for Haiti, these designers will exhibit an array of fashion talents and achievements. The presentation will shine the light on the island and the role that Fashion can play in the rebuilding efforts. This will be an exceptional display of creativity beyond all odds while overcoming numerous adversities. A special presentation by Michael Capponi on the work he has accomplished in the past year.

2PM-11PM Funkshion presents Masquerade Motel featuring fashion shows by Indashio and The Blonds that will coincide with a performance by The Swedish House Mafia and their friends.