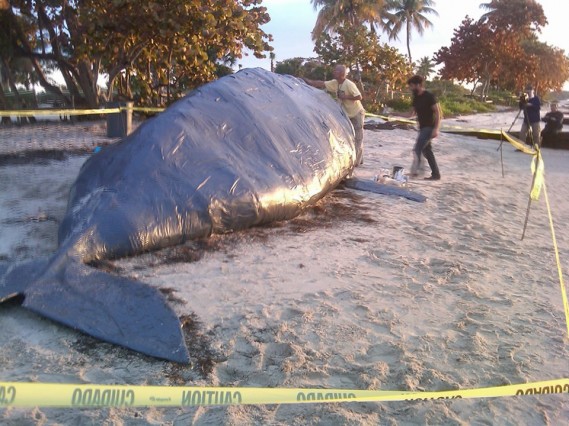 This year Friends of Nature Music Festival (FON Festival) will launch its first edition with two days of spectacular music, food, entertainment and a wide variety of activities as well as exhibitors. A unique location will soon be announced. The festivities began today with a 29 foot paper maché whale designed by Miami artist Ernesto Damian in partnership with artist Roberto Sanchez. The whale was placed on the sandy beaches of Historic Virginia Key Beach Park on Key Biscayne in the City of Miami where the community curiously passed by. Every month leading up to the Festival, a series of publicity stunts will act as celebratory stepping stones to the Festival dates.

The paper maché sculpture was crafted from 100% recycled material including wooden pallets found in dumpsters and newspapers that were donated by Miami New Times. It resembles the North Atlantic Right Whale which is one of the planet’s most endangered species with only a few hundred remaining. The Festival will be donating the sculpture to the Park.

FON Festival will welcome over 40,000 attendees throughout two days of spectacular music, art, and beach fun with the purpose of raising environmental awareness and promoting companies that have green initiatives (dates soon to be announced). The Festival will take place on the Historic Virginia Key Beach Park. The location was the perfect match for the Festival considering the united missions of the Festival, the Beach Park, and the Virginia Key Beach Park Trust.

“We were really attracted to this location because we knew the Trust and the Beach Park had the same mission we did which is preservation of our planet including its green inhabitants,” states Oscar Diaz, Co-Founder of FON Festival and Co-Owner of Eyeness Productions which is planning the Festival.

FON Festival is the first comprehensively eco-friendly, interactive music festival to occur in Miami with the objective of raising awareness about the planet. The Festival’s mission is to transcend the limitations of the commonplace music festival and leave a meaningful and lasting legacy of environmentally sound concerts. The Festival will feature eco-friendly initiatives from the sponsoring products to the tickets sold. The Festival organizers aim to set the standard for other Festivals and events by encouraging environmental protection and sustainability.

Festivals are known for creating tons of waste. FON Festival along with the Beach Park and the Trust are pushing to change this for all Festivals by leading as an example. On the Festival grounds there will be numerous recycle stations, compost stations, water stations where attendees can refill their water packs or bottle instead of wasting bottled water, biodegradable and edible cups. Over 200 volunteers will be picking up trash and there will be a zero tolerance on loitering.

“Friends of Nature Music Festival is very exciting in its mission to raise public awareness about the health of our environment and planet”, said Guy Forchion, Executive Director of the Virginia Key Beach Park Trust.  “The Trust shares those ideals in our environmental mission along with the importance of civic activism, free exchange of ideas and providing a nature community space for recreation and public interaction.  FON Festival will be a unifying event for South Florida’s environmentally conscious communities, I look forward to it.”

“FON Festival was created with the idea of starting a movement to raise awareness about our planet and to push major companies to produce and promote more green products. We believe that we can still enjoy the things we love, we just simply have to make sure we are not being selfish with our planet,” says Ines Galindo, Co-Founder of FON Festival and Co-Owner of Eyeness Productions.

The star-studded entertainment lineup will consist of more than 50 bands, DJ’s, comedians, and guest speakers from all over the world. The genres of music will include: Indie Rock, Reggae, Dubstep, Tech-House, Techno, Folk, World, Minimal, Funk, Metal, Jazz, and more. The Festival will host multiple staging area including 2 main stages, DJ tents, eco-villages, eco-friendly lounges and vendor stations.

These staging areas will feature an array of activities, exhibits and interactive stations which will keep attendees occupied at every step. Some of the activities include camping, canoeing, water sports, movies on the beach, comedy shows, live art installations, guest speakers and major musical acts. Vendors will include fresh fruit markets, exotic eco-vendors such as organic soap makers, alternative energy gadgets or an artist displaying his guitars which are created from cigar boxes. Other eco-activities include stations which teach attendees how to pick fruits and vegetables, make homemade detergent or grow personal vegetable gardens. All of Miami’s famed food trucks will also be on Festival grounds serving some of the community’s favorite treats.

Every year, the Festival will donate a percentage of the sold tickets to organizations dedicated to protecting the environment. For 2013, 20% of the net profit will be given to the Ocean Preservation Society (OPS) to aid their efforts in the protection and liberation of marine wildlife throughout the globe. OPS is a non-profit that creates film, photography and media to inspire people to save the oceans and animals. They produced their first documentary film in 2009, The Cove, which has won over 70 awards globally including the Oscar for Best Documentary Feature in 2009. On the grounds of the Festival will also be a section donated to environmental preservationist foundation booths where organizations such as Ocean River Institute (ORI) will have the opportunity to spread their important message while interacting with attendees.

To further their environmental commitment, the festival’s Management team is planning to source all power from natural sources such as solar, biofuel and natural gas generators, while ensuring that all products sold remain true to their eco-friendly mandate.