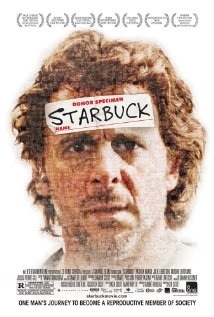 ADMISSION:
Tickets for screenings of Starbuck & Antiviral, including the Q&A, are $11.50 and under. Special ticket prices for Flamenco Hoy 3D are $20 and under. Tickets are available at the box office and on the Cinema’s website at www.gablescinema.com

Starting Friday, April 26, the Coral Gables Art Cinema presents the South Florida First Run Engagement of the French-Canadian comedy Starbuck in 2K Digital Cinema Projection. The film stars Patrick Huard, nominated for a Genie Award (the Canadian equivalent of the Oscars) for his role in the comedy, as a 42-year old lovable but perpetual screw-up who finally decides to take control of his life. A “habitual” sperm donor in his youth, he discovers that he’s the biological father of 533 children, 142 of whom are trying to force the fertility clinic to reveal the true identity of the prolific donor, code-named Starbuck. The film was an audience favorite at the Toronto Film Festival and was one of the highest local grossing Quebecois films in Canada when it opened.

The Gables Cinema continues its late-night Gables After Hours series with the a final, second weekend of the Exclusive Miami Theatrical Premiere of Brandon Cronenberg’s effectively chilling thriller Antiviral, Friday and Saturday, April 26 and April 27, at 11:30 pm, in 2K Digital Cinema Projection. Cronenberg himself will introduce the Friday showing of his opera-prima feature via a live-video link connection. Nominated at the Cannes Film Festival for the Un Certain Regard award, Cronenberg’s (son of visionary director David Cronenberg) Antiviral is a decidedly creepy and dystopoian look into a near-future where celebrity obsession has gone sick, literally. Gables After Hours will continue to showcase an eclectic mix of films ranging from the strange, sexy, horrific, beautiful and offbeat. Both screenings will include 2-4-1 drink offers and other specials at the Cinema Café. The Toronto Star says, “Obviously influenced by his dad David’s early work but also showing a strong personal style, Brandon Cronenberg’s feature debut is a body-horror satire with a point – a needle point.”
Due to popular demand, special encore screenings of the 3D dance extravaganza Flamenco Hoy 3D, directed by celebrated film maestro Carlos Saura, and recorded in San Sebastián, Spain, will take place on Saturday and Sunday, April 27 and 28, at 1:00 pm at the Coral Gables Art Cinema. The Cinema is expanding its diverse series of special event screenings of “live” performances from across the globe, beginning with this presentation. Audience members will feel as if they have been transported to Spain, with stunningly produced 2K Digital Cinema Projection in 3D of a live-to-tape recording on the large screen of the theater. This spectacular showcase of flamenco is filled with breathtaking dance, dynamic music, and soul-searing singing. Featuring 20 of Spain’s most exciting artists from the new generation of flamenco, dramatic choreography by Rafael Estevez and Nani Panos, and musical direction by the electrifying pianist Chano Dominguez, this dazzling show takes the audience into the heart of flamenco today, using the 21s century technology of 3D digital projection. The Guardian says it “Sizzles.”

Director Ken Scott’s (Sticky Fingers) Starbuck is a sweet yet crazy comedy with a message, about the implications of sperm donation and the meaning of family and the new millennium. While seeming fantastical, the film was actually inspired by real-life, similar, stories. The film also stars Julie Le Breton, as David’s long suffering girlfriend who suddenly finds herself pregnant and understandably reluctant to share parenthood with the unreliable loser and Antoine Bertrand, David’s longtime friend, an attorney who takes on his case while trying to disabuse him of the joys of parenthood. With distinctly Quebecois humor at its root, the film is also very appealing to international audiences because of its universal themes. The Toronto Star raves, “A wonderfully sweet and poignant comedy that goes in all kinds of unexpected directions.”

Gables Cinema Director Robert Rosenberg says, “Starbuck is a sprawling, funny,absurd and yet oh-so-real comedy that Miami audiences will really love .” Tickets for Starbuck and Antiviral are $11.50 and under. Special ticket prices for Flamenco Hoy 3D are $20 and under. Tickets are available for purchase in advance on the Cinema’s website at www.gablescinema.com or in person at the box office during regular screening hours. For more information visit the website or the Cinema’s Facebook page, www.facebook/gablescinema, or contact the Cinema at info@gablescinema.com or (786) 385-9689.