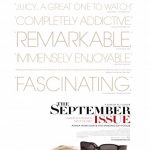 Anna Wintour, the legendary editor-in-chief of Vogue Magazine for over twenty years is the most powerful and polorizing figure in fashion. Hidden behind her trademark bob and sunglasses, she has never allowed anyone to scrutinize the inner workings of her magazine. Until now.

With unprecedented access, filmmaker R.J. Cutler’s new film The September Issue does for fashion what he did for politics in the war room, taking the viewer inside a world they only think they know.

Join Miami International Film Festival and the Miami Film Society for a special sneak screening of The September Issue.

Played to five sold out houses at the Sundance Film Festival.

Please RSVP to info@miamifilmfestival.com or call 305.237.7979. Seating is limited and invitation is on a first come, first serve basis ( you plus one guest, please).