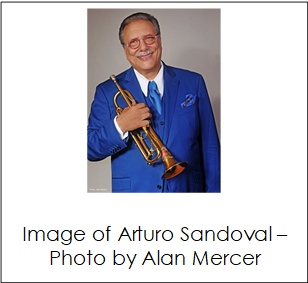 FOR LOVE OR COUNTRY: THE ARTURO SANDOVAL STORY

The Adrienne Arsht Center for the Performing Arts of Miami-Dade County (@arshtcenter) is proud to kick off its 17th season with FOR LOVE OR COUNTRY: THE ARTURO SANDOVAL STORYon October 1 as part of its 2022-2023 LIVE AT KNIGHT series. ARTURO SANDOVAL (@arturo_sandoval_arocha), legendary Cuban trumpeter, composer, 10-time Grammy winner and Presidential Medal of Freedom recipient, will perform music from his autobiographical HBO film FOR LOVE OR COUNTRY: THE ARTURO SANDOVAL STORY live with the FROST SCHOOL OF MUSIC’s HENRY MANCINI INSTITUTE ORCHESTRA (@frostschoolum) and special guests while the digitally remastered movie plays on a large screen. This special one-night-only performance will be under the direction of acclaimed music director and concert producer ANGEL VELEZ (@a.n.g.e.l.v.e.l.e.z).

The 2022-2023 LIVE AT KNIGHT series is supported by Spirit Airlines, BACARDÍ, Epic Hotel and Café Bustelo.

Digitally remastered for the big screen, FOR LOVE OR COUNTRY: THE ARTURO SANDOVAL STORY is a classic love narrative set amidst the struggles of one man’s search for freedom during the height of the Castro regime but standing as a symbolic universal beacon of hope and solidarity for the inalienable rights of liberty for all. Twenty-two years following the film’s release, its story speaks to a new generation, Cuban and not, bringing hope and unity in the fight against injustice and surrounded by the joy of musicmaking by one of the world’s greatest musicians.

A protegé of legendary jazz master Dizzy Gillespie, Sandoval was born in Artemisa, a small town in the outskirts of Havana, Cuba, on November 6, 1949, just two years after Gillespie became the first musician to bring Latin influences into American jazz. Sandoval began studying classical trumpet at the age of 12, but it didn’t take him long to catch the excitement of the jazz world. He has since evolved into one of the world’s most acknowledged guardians of jazz trumpet and flugelhorn, and is a renowned classical artist, pianist and composer.

He is one of the most dynamic and vivacious performers of our time, and has been seen by millions at the Oscars, the Grammy Awards and the Billboard Awards. Sandoval has won 10 Grammy Awards and been nominated 19 times. He has also received six Billboard Awards and an Emmy Award. The latter was for his composing work on the score of the HBO movie based on his life, For Love or Country, which starred Andy Garcia as Arturo. His two most recent Grammy Award-winning albums, Dear Diz (Every Day I Think of You) and Tango Como Yo Te Siento, were released in 2012.

His compositions can also be heard in movies such as Clint Eastwood’s The Mule and Richard Jewel; 1001 to 1: The Cory Weissman Story, starring Beau Bridges; At Middleton, starring Andy Garcia and Vera Farmiga; and Dave Grusin’s soundtrack for Havana and Random Heart. For more information, go to arturosandoval.com.

Angel Velez is one of today’s most sought-after conductors for film and television and guest conducting for pops concerts around the world having given world premiere concert performances for hits such as Captain Marvel, Green Book, Tom and Jerry in New York, The Book of Boba Fett and many more.  In addition to his work in the studios of Los Angeles and as conductor of the Santa Monica Chamber Orchestra, he has served as music director for the Los Angeles Live Score Film Festival, American Society of Cinematographers Awards, Indianapolis Motor Speedway, and Miss World 2021, one of the largest televised events in the world.

He has produced concerts such as Silent Films Live, Star Wars: Past and Present and the upcoming HBO film For Love or Country: The Arturo Sandoval Story starring trumpet legend Arturo Sandoval and actor/producer Andy Garcia live in concert in Miami.  He has recorded for the Varese Sarabande and Sudwestrundfunk labels and continues to work in the entertainment industry on shows such as Star Wars: The Clone Wars, Star Wars: Rebels, Family Guy, Jane the Virgin, The Mandalorian and many others, including the upcoming MGM superhero film Samaritan starring Sylvester Stallone. For more information, visit angelvelezmusic.com.