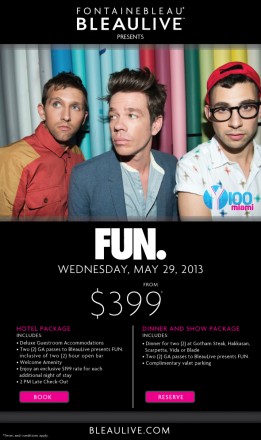 Once known as the “Hollywood of the East Coast,” Fontainebleau Miami Beach continues its legacy of hosting top entertainers when two-time GRAMMY Award winning indie pop band fun. takes the stage May 29, 2013 as part of the iconic hotel’s BleauLive performance series. BleauLive crafts a fully immersive destination experience with a number of “surprise and delight” moments including personal guest interaction with the artist.

“Having recently taken home two GRAMMY Awards for Best New Artist and Song of the Year, fun. is an amazing addition to the roster top talent who have performed in our BleauLive concert series at Fontainebleau Miami Beach,” said Philip Goldfarb, President and COO, Fontainebleau Miami Beach. “fun. exemplifies the diversity of talent we are looking for when crafting our BleauLive series, which has featured talent ranging from Jewel to Pitbull since the BleauLive platform launched Labor Day weekend 2011.”

BLEAU FAN PACKAGE*
For stays on May 29, 2013 with no minimum number of nights, the package includes:
Room rates starting at $499
Deluxe guestroom accommodations
Two (2) General Admission passes to BleauLive presents “fun.” on Wed., May 29, 2013.
2-hour premium open-bar during the show
Welcome amenity
An exclusive $199 rate for each additional night of stay
A 2 p.m. late check-out