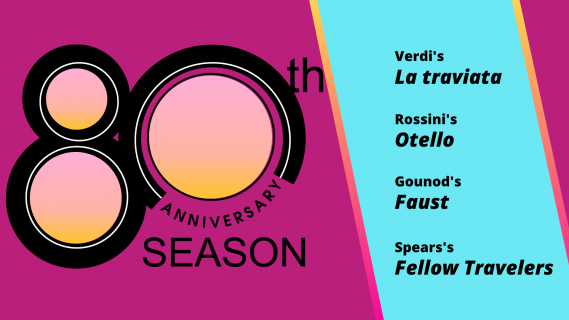 Florida Grand Opera is thrilled to announce the 2020-2021 season in Miami and Fort Lauderdale. The 80th Anniversary season includes Verdi’s masterpiece, La traviata; Rossini’s Otello; Gounod’s French classic, Faust and the Miami premiere of Gregory Spears’s Fellow Travelers, based on the time in US history that became known as “The Lavender Scare.” Miami performances will be at the Adrienne Arsht Center for the Performing Arts and Fort Lauderdale performances will be at the Broward Center for Performing Arts. Fellow Travelers will be part of our Made for Miami series, “Opera at Knight” at the Knight Concert Hall at the Arsht Center, in Miami, FL.

After a series of loveless liaisons, Violetta Valéry, a popular member of the Parisian demi monde(the class of women considered to be of doubtful morality and social standing), is stunned to discover she may have fallen in love at last. But her newfound happiness is shattered when her lover’s father appears, demanding that she give his son up. With a broken heart, she agrees to leave young Alfredo but only on condition that one day he will be told of the sacrifice she made.

After a long separation, Alfredo, having learned what she had done, rushes back to her side, but is shocked to find her near death. La traviata, with its gripping conclusion, features some of the most famous arias ever written; you will be enthralled at the full scope of Verdi’s genius on display here. We guarantee you will be as moved as Julia Roberts’s character was in “Pretty Woman.”

Sung in Italian with English and Spanish projected translations.

Shakespeare’s great tragedy has provided endless inspiration to creative artists, and Rossini was certainly one of these. The story of a hero’s boundless love transformed into murderous jealousy and rage is breathtaking to witness, and the evil poisoner is surely one of literature’s vilest and mesmerizing characters.

Rossini’s famous “Willow Song” for Desdemona is some of his loveliest music, and there are no fewer than six tenors in the cast. Don’t miss this opportunity to enjoy a seldom-seen major work from the most popular and successful opera composer of his era.

Sung in Italian with English and Spanish projected translations.

Aging and disillusioned, Faust encounters the devil, who promises him everything he has lost in life for the mere price of his soul. This unholy bargain is central to one of the world’s most famous operas, and Gounod’s powerful music masterfully underscores this misguided tragedy as it unfolds before us.

His youth restored, Faust woos the lovely Marguerite with disastrous consequences, and it is soon apparent that this “dance with the devil” can only end badly. Can anything in heaven or on earth save them? The stunning trio that concludes the opera is one of the most compelling in the repertory.

Sung in French with English and Spanish projected translations.

On April 27, 1953, amidst the “Red Scare” paranoia over communism, President Dwight Eisenhower signed Executive Order 10450, which deemed homosexuality a security risk. A systematic effort to remove gay people from the federal government began, with estimates of 10,000 people fired or forced to resign. Countless others committed suicide. This shameful episode in US history became known as “The Lavender Scare.”

Fellow Travelers is set in the landscape of The Lavender Scare and tells the story of Timothy Laughlin, an aspiring young journalist, and Hawkins Fuller, a handsome State Department official. A chance encounter with Fuller leads to Tim’s first job in DC, and his first love affair. As his involvement deepens, Tim struggles to reconcile his political convictions, his religious beliefs, and his love for Fuller–an entanglement that ends in a stunning act of betrayal.

Fellow Travelers will be part of our Made for Miami series, “Opera at Knight” at the Knight Concert Hall at the Arsht Center, in Miami, FL.

Sung in English with English and Spanish projected translations.

Made for Miami Series

The 2020-21 season will be the eighth consecutive year for the Made for Miami Series in which FGO produces an opera geared towards the diverse South Florida Community. The operas presented are generally smaller productions and in many cases, 20th or 21st-century work. Previous productions in the Made for Miami series included, Robert Xavier Rodriguez’s Frida, Daniel Catán’s Florencia en el Amazonas, Jorge Martin’s Before Night Falls, Mieczysław Weinberg’s The Passenger, Gian Carlo Menotti’s The Consul, and Marvin David Levy’sMourning Becomes Elektra. Later this season, FGO will present Il matrimonio segreto (The Secret Marriage) with a Miami twist, transforming the Italian opera into a Spanish language telenovela with a Cuban family set in 1980s Miami. Four performances of Il matrimonio segreto (The Secret Marriage) are set for April 18-26, 2020, at Miami-Dade County Auditorium.

Single tickets for the 2020-21 season will go on sale September 2020. Lock in the best seats at the best prices by subscribing.