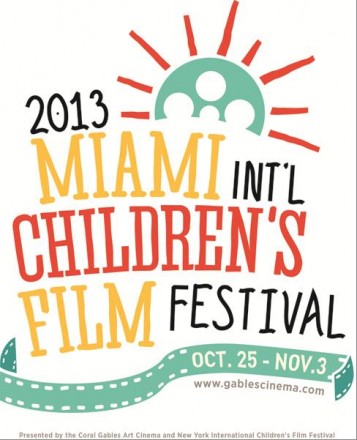 The Festival will showcase a diverse range of premieres of international family-friendly films not otherwise available to Miami audiences, as well as hands-on workshops, parties, meet-the-filmmaker events and more. The goal is to provide South Florida families with fun, meaningful and thought provoking activities within a supportive community setting, exposing children to alternative film programming that can broaden their horizons.

Miami International Children’s Film Festival is an outgrowth of a successful history of specialized family-friendly film events, summer film camps and a highly acclaimed first-run art house exhibition schedule at the Coral Gables Art Cinema. The Festival will have films and programs for children from ages three to adult, with special offerings for pre-teens and teenagers, including animated and live-action shorts and features.

“We are excited to bring this high quality, non-commercial cultural event to Miami,” says Steven Krams, President and Founder of the Cinema. “We know from our almost three years of operation that there is a pent-up demand for art house films for kids that has not been met here.”

The Miami Festival is also a unique partnership with the New York International Children’s Film Festival, the largest one of its kind for children and teens in North America. “Rather than reinventing the wheel, working with New York allows us to have the kind of global reach for new films for children, and their almost two decades of expertise, that we would otherwise not have as a start-up,” said Rosenberg. Other groups that will be collaborating with the Miami International Children’s Film Festival include Books & Books, the Coral Gables Museum, the Florida Film Institute and Miami-Dade Public Schools. Nina Guralnick, Executive Director of the New York International Children’s Film Festival, says, “We are eager to share our outstanding line up of unique, thought-provoking films with children in Miami, and equally delighted to be working with the Gables Cinema.”

A full line-up and schedule for the Festival, along with ticket prices and how-to-purchase information, will be available starting September 1. For more information visit the Cinema’s website www.gablescinema.com or the Cinema’s Facebook page www.facebook/gablescinema, and contact the Cinema at info@gablescinema.com or (786) 385-9689. The Coral Gables Art Cinema is located at 260 Aragon Avenue, directly across the street from Books & Books, on the western end of the ground floor of the Museum Parking Garage.

The Coral Gables Art Cinema is South Florida’s leading state-of-the-art venue for experiencing independent, alternative and international film, offering first-run, seven-day-a-week showcase presentations in both 35mm and true industry-standard theater quality 2k Digital Cinema Projection. It is located at 260 Aragon Avenue, directly across the street from Books & Books, on the western end of the ground floor of the Museum Parking Garage.

New York International Children’s Film Festival, established in 1997, is an Oscar®-qualifying festival comprised of approximately 75 events, attended by over 30,000 audience members held in theaters throughout New York City, with a marketing reach of over 2 million and a media reach of over 200 million. It premieres 100 exceptional new films from around the world and hosts filmmaker Q&As, receptions, panels, workshops, retrospectives, audience voting, and the NYICFF Awards Ceremony.

Funding for Miami International Children’s Film Festival comes in part from the John S. and James L. Knight Foundation, as part of its Knight Arts Challenge, and the Miami-Dade County Department of Cultural Affairs and the Mayor and Board of County Commissioners. Additional support for the Coral Gables Art Cinema comes from the City of Coral Gables; the Coral Gables Community Foundation; Steven Krams and Midge Blumberg-Krams; Bacardi; and the many businesses, individual donors and members who contribute to the Cinema’s work.