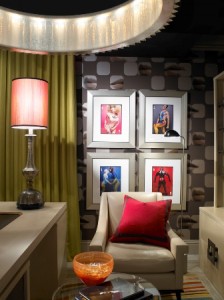 The Wolfsonian is one of three cultural institutions benefiting from the Design Center of the Americas (DCOTA) 2011 DesignHouse, on view January 19 through July 15, 2011. DesignHouse showcases almost twenty installations created by design firms who competed to participate. The installations are all related to the theme Film + Design: The Golden Age of Hollywood; each installation is based on an iconic film from the era spanning the 1920s-1960s and each is fabricated using resources from DCOTA showrooms. “We’re thrilled and honored to be one of this year’s beneficiaries of DesignHouse,” says Cathy Leff, The Wolfsonian’s director. “This kind of synergy between institutions involved in the design and art worlds supporting and working with each other is a wonderful testament to the vibrancy of South Florida’s arts-related cultural and commercial communities.”

DesignHouse is a Wolfsonian Visionaries Event and is coordinated by Ashlee Harrison, a member of the Visionaries and director of marketing for DCOTA. DesignHouse kicks off with a Preview Gala on January 18, 7-10pm at DCOTA. Guests will have the opportunity to view the show, meet the design committee, and enjoy Hollywood-inspired entertainment and hors d’oeuvres. Tickets for the event are $100 per person. The following day, DesignHouse opens to the public; admission is $15 per person. Several programs and events will be offered in conjunction with DesignHouse including films, lectures, presentations, and tours. Other institutions benefiting from DesignHouse are The Museum of Art Fort Lauderdale and The Palm Beach County Cultural Council. The Wolfsonian encourages its members and friends to visit DesignHouse not only to view the creative work of virtuoso designers but to support DCOTA and its generosity to the area’s cultural institutions.