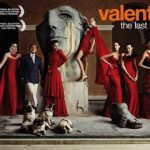 An MBC Premiere DIGITAL Presentation! In collaboration with Emerging Pictures

Valentino:The Last Emperor is a feature-length film on the legendary designer Valentino Garavani in the wake of his exit in 2008 from the company he founded in Rome more than 45 years ago. Produced and directed by Matt Tyrnauer, Special Correspondent for Vanity Fair magazine, the film is an intimate, engaging and very funny fly-on-the-wall exploration of the singular world of one of Italy’s richest and most famous men.