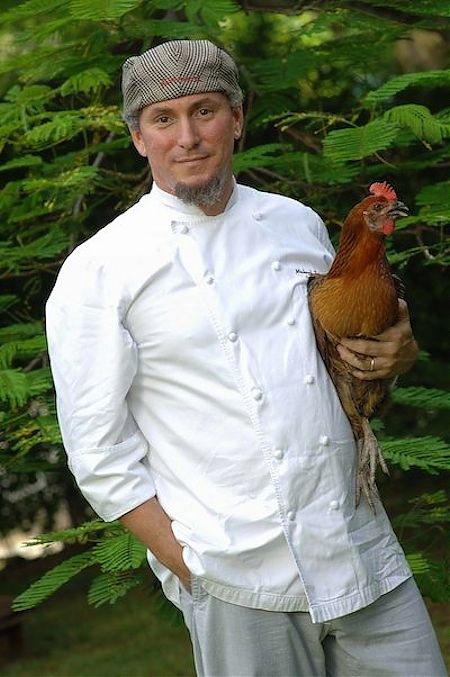 Often times when we go to a restaurant and enjoy great meals; we do not think beyond the restaurant in terms of how and who produces the food that we consume. We often compliment the chef or the establishment on how delicious and fresh the food they prepare and serve is. However the food that we consume is a larger part of a food chain that goes beyond the restaurant and this is where Michael Genuine’s Farm to Table Series comes into play. Farm To Table Series was created by Michael to highlight the importance of local agriculture and farmers in Cayman Islands.

Michael Schwartz renowned Chef and owner of Michael’s Genuine Food & Drink in the Miami area says he was drawn to the Island because of a project that focused on developing Camana Bay area on the island. He explains that after traveling to the area a few times he saw the vision of what they were trying to accomplish with the project and he also fell in love with the people which lead to him opening his second Michael’s Genuine Food & Drink Resturant in Cayman Island (Camana Bay). Another thing that helped him to make the decision in opening the restaurant on the island is that he saw that locally there was enough agriculture to sustain the business that he was interested in doing. He is also passionate about making sure that he contributes to the sustainability of the area which is why he depends heavily on local agriculture to run his business. By supporting the local framers Michael is ensuring that the locals will be able to be a part of the development and sustainability of the community. The farmers will also know that they are appreciated for their hard work and may even get the opportunity to get away from the farm sometimes and interact with the people who consume what they produce.

What is your connection to Cayman?

Michael Schwartz: I was drawn to the project in Caymana Bay and what they were doing and the vision that they wanted to achieve. We started visiting the island and liked obviously the project and the people and then we also saw that there was enough agriculture going on to support our concept and what we wanted to do and we thought that it would be a good idea to open a restaurant.

When did you start cooking?

Michael Schwartz: I started cooking when I was sixteen.

What exactly is the Farm To Table series about?

Michael Schwartz: The Farm Table series is really just that. Its focusing on highlighting the farmers and the products and what they do and making the connection between the farmers and the restaurant and ultimately the guest who are gonna eat the food. So our idea was to sort of bring everyone together at the table. So that we can raise the awareness of what these guys are doing what they are producing and how it can impact people locally and how important it for them to support local agriculture.

Tell us about the foods featured in the Farm to Table Series?

Michael Schwartz: It is really based on what is available at the moment when the event is being held and what’s seasonal. It is somewhat unpredictable. So while we may love to offer fish we cannot predict what they will catch on the day before the event or the day of the event. It is really focusing on what’s going on. You know we are in the mango season so the next Farm to Table will feature lots of mango. Things are served family style so it’s a fun interactive event and a way to connect with your local farmer the people who are growing your food.

Why did you feel the need to highlight how important it is to support local agriculture?

Michael Schwartz: It is part of what we do. It is a big part of our mission and our goal here in Miami and in Cayman as well to feature or highlight the product that are closest to where we live.

Will the Farm to Table Series become a permanent event or is it for a period of time?

Michael Schwartz: You know that is a good question. We started it as a series the fact is it is what we do everyday. This opportunity was to make it an event on a monthly basis so that we can draw more awareness to what’s going on locally there. I think that people seem to enjoy it and it gives us a platform to really showcase what we do on an everyday basis but we make an event out of it. And it is also an opportunity to get the farmers out of their farms and into the restaurant to make that connection with the guest too. So I think that it is something that we are gonna continue to do certainly for now we are having fun with it.

I understand that you are not only a Chef but an author as well. So tell us about your cookbook?

The name of the restaurant is Michael’s Genuine Food And Drink was it name with the intention of what you are doing now?

Michael Schwartz: Well its my name (laughs). I mean Genuine is really the measuring stick that word represents what we stand for ,what we do and what we support in the restaurant. So it wouldn’t be any fun just to call it Michael’s so we had to expand about that a little bit and that word genuine we really love that word.

For anyone who has never had the Michael Genuine experience what should they expect when they visit your establishment?

Michael Schwartz: It is a well rounded experience where hospitality is a big part of that. The ambiance what you hear, see and then also expect what you eat are foods that are carefully sourced and simply prepared. And maybe try something that they never had before.