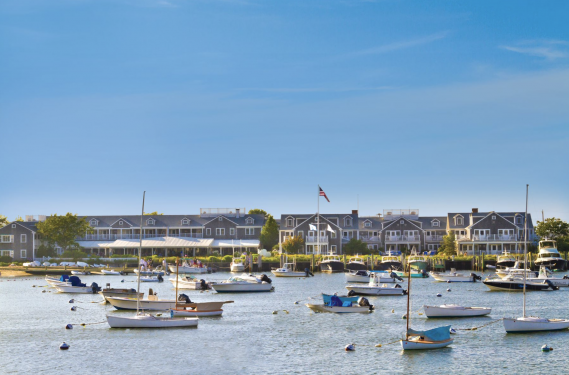 There’s no denying that Nantucket is the quintessential summer destination, but true insiders know that fall is when the island really shines. The crowds disperse and beachcombers can spread out across the island’s 82 miles of coastline to make the most of the last summer days. Food-lovers will rejoice at the arrival of autumnal treats such as fresh, local cranberries from the largest certified organic bog in the country; and Nantucket Bay scallops, only available during the cooler months. From new suites to private tours and holiday cheer, here’s everything you need to know to close out 2020 on island.

New Suites at Jared Coffin House
Jared Coffin House, a former whaling merchant’s home located in the heart of town, unveiled new accommodations on August 15, 2020. While retaining the historic architecture of the 19th-century building, portions of the ground floor were transformed from a former restaurant space into four suites and one guestroom. Each of the suites are named after historic female figures on Nantucket, including Anna Gardner, who was instrumental in organizing an anti-slavery meeting in 1841 during which Frederick Douglass gave his first speech as an abolitionist speaker.

Throw it B(ACK) to the Whaling Days
Nantucket has a centuries-old history as one of the world’s most important whaling ports. November 20, 2020 will mark the 200th anniversary of the sinking of the Essex, the Nantucket-based whale ship that inspired Herman Melville’s Moby-Dick. Today, visitors can explore the island’s rich history on foot with a self-guided walking tour past the Jethro Coffin House, the sole surviving structure from the island’s original seventeenth-century English settlement; and to the Brant Point Lighthouse, which became a fixture for navigating whaleships safely back to port. The Whaling Museum, housed in a 19th-century candle factory, tells the story of the rise and fall of the industry, and is a must visit for all travelers. New for 2020, White Elephant Resort’s Pre-arrival Concierge can assist with arranging private tours each Sunday while the museum is closed to the public.

Ho Ho Holiday Celebrations
The 47th annual Christmas Stroll, November 28-December 6, 2020 feels like you’re stepping into a Charles Dickens backdrop with every corner of Nantucket’s historic downtown transformed into a winter wonderland. As an ode to its original roots, the theme of this year’s event will be centered around shopping local for the holidays. Stroll originally started over four decades ago as an effort to keep residents from leaving Nantucket to buy gifts on the mainland. Today, boutiques remain open through early December and will have elaborately designed storefronts outfitted with twinkling lights. Downtown’s cobblestone streets will also be lined with hundreds of seven-foot fit lit trees decorated by locals. Festive attire and ugly sweaters are encouraged.

Zoom from Here
Those looking for a last dose of sunshine before winter – and a change of scenery for your Zoom meetings – can make White Elephant Resorts their new home. Parents and children alike can set up their new remote station in either a King Room or one-bedroom residence at White Elephant overlooking Nantucket Harbor or in a room or suite at the historic Jared Coffin House. With the offer, families will enjoy a dining credit at Brant Point Grill or Nantucket Tap Room with all-day room service delivery, complimentary WIFI and a welcome kit stocked with a Swell bottle, notebooks, and snacks to keep you going – including beloved Aunt Leah’s Fudge – a staple on island for more than 40 years. Rates at White Elephant begin at $2,095 per week and $1,365 per week at Jared Coffin House.

Extra! Extra!
In addition to the miles of sand and sea, Nantucket is host to a variety of cultural offerings. Here are a few of our favorites to add to the autumn calendar.

How to Get There

JetBlue offers direct flights from New York City through October 19 and from Boston through September 27. Seastreak Ferry’s seasonal service between Manhattan and Nantucket is available through October 8. Cape Air flights connecting from Boston are available to the island year-round, as is ferry service from Hyannis, MA.

P.S. The Elephant is Migrating This Winter…

As the Nantucket season closes for the winter, travelers will look south for warmer weather. Welcomed by the beloved elephant statue, White Elephant Palm Beach will open its doors for the first time on November 4, 2020. The brand new 32-room hotel is housed in the former Bradley Park Hotel – originally constructed in 1924 as one of the first resorts on Palm Beach’s Main Street. Given it’s listed with the Landmark Preservation Commission, the footprint of the structure and the facade remained, while the interiors have been stripped to the bones and rebuilt by Boston-based Elkus Manfredi Architects.