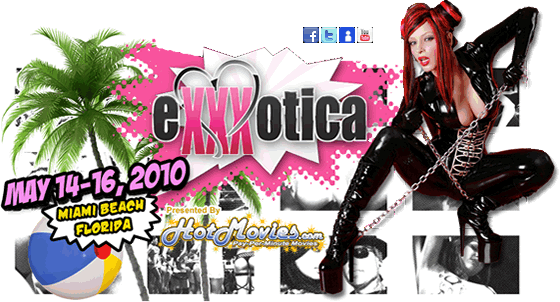 Victory Tradeshow Management, the producers of the EXXXOTICA Expo (www.eXXXoticaExpo.com), are set to bring the largest adult consumer event in the country back to the Miami Beach Convention Center, May 15th through 17th. 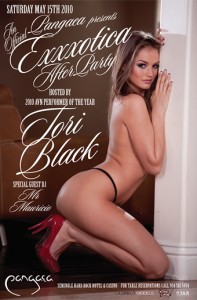 The EXXXOTICA Expo, presented by HotMovies.com, has become an annual staple to the South Florida area. Averaging nearly 20,000 attendees annually, and in celebration of their fifth anniversary, this year’s EXXXOTICA is pulling out all the stops and promises their biggest and best show to date. 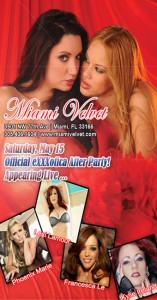 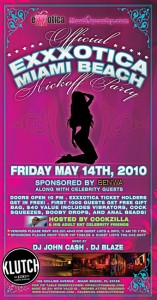 Highlights of the show will once again include the massive “Fantasy Island” attraction (sponsored by Genesis Magazine). This is the place where fans can meet their favorite stars from adult films that will be on hand to meet and greet fans. Some of the names already confirmed for EXXXOTICA’s “Fantasy Island” include superstars such as Digital Playground’s Jesse Jane®, Adam & Eve stars Teagan Presley, Bree Olson and Alexis Ford, adult superstars Jenna Haze, Sunny Leone, Gina Lynn and Alexis Texas, AVN and XBIZ “Best New Starlet” winner Kagney Linn Karter, Jersey Shore XXX star Taryn Thomas, and many more to come. When all is said and done, well over 20 of adult’s biggest and brightest will be appearing at EXXXOTICA’s “Fantasy Island.” 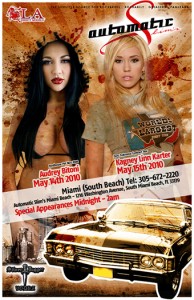 This year’s show will also feature the South Beach debut of the “Legends of EXXXOTICA” — an adult movie hall of fame come to life. “Legends of EXXXOTICA” will feature some of the biggest names in the history of adult spanning over four decades. Some of the legends already scheduled to appear include Lisa Ann, Seka, Raylene, Taylor Wane, Sean Michaels and Mr. Marcus, and many more of your favorite legends you have watched over the years will be appearing at this year’s show. 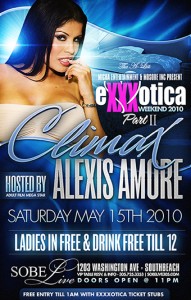 “It seems like yesterday that EXXXOTICA was just thought in our head and to see the way that it has grown over the past five years is amazing,” said J. Handy, Director of Victory Tradeshow Management. “South Beach has really embraced EXXXOTICA and we’re looking forward to many years to come.” 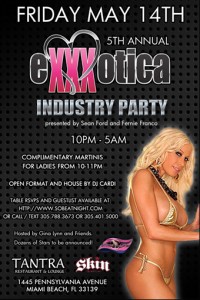 The giant fan-friendly event also offers attendees the chance to “celebrate sexy” with dozens of interactive shows and events. The entertainment stage hosts a jam-packed schedule sure to grab the attention of every attendee, highlighted by the Ms. EXXXOTICA Competition, where local beauties vie for a $1,000 prize. Also, there is an educational seminar series designed to inform and tantalize attendees. Lastly, the show wouldn’t be complete without their trademark EXXXOTICA Hotties who will be putting on a show in every square foot of the massive space of the Convention Center. 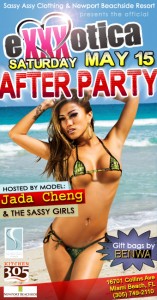 Fans are also invited to party with their purchase of EXXXOTICA VIP pass in the super-sexy VIP Lounge, which will feature great music, the hottest girls and full service bars serving top shelf cocktails. Those fans who are 21 and over will be able to escape the craziness that is the show floor and enter the non-stop party that is EXXXOTICA’s VIP Lounge where you never know who will show up. And for a different kind of party, couples and single ladies can enjoy “The Bedroom”, and über-VIP area has a totally different vibe.  Find an open cabana or cuddle up on one of the many beds as you mingle with other like-minded people.

Fans are also urged to stay tuned to www.eXXXoticaExpo.com for continual updates of talent appearances, exhibitors, and entertainment and they can also subscribe to a Twitter feed @EXXXOTICA for announcements and special giveaways, including announcements of special events planned for the 5th anniversary of EXXXOTICA Miami Beach.

To secure booth space and sponsorships for the EXXXOTICA Expo, please contact Victory Tradeshow Management at info@vtshows.com or call (215) 462-8800.

Accredited members of the media wishing to cover EXXXOTICA and talent interested in appearing at the show, please contact EXXXOTICA’s public relations team at pr@vtshows.com.

EXXXOTICA Miami Beach 2010, presented by Hotmovies.com is scheduled for Friday, May 14th through Sunday, May 16 at the Miami Beach Convention Center. Hours are Friday from 4PM to 11PM, Saturday, from 1pm to 11PM and Sunday from Noon to 7PM.