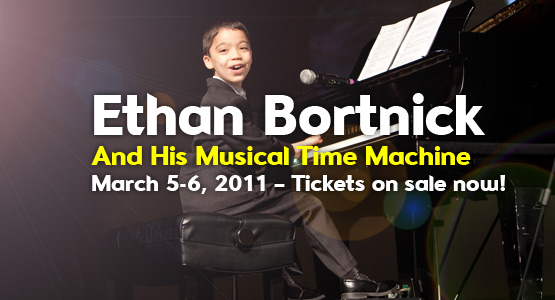 Ten-year-old pianist, composer, and entertainer Ethan Bortnick brings his nationally touring show to the Hollywood Central Performing Arts Center (HCPAC) on Sat., March 5 and Sun., March 6. Before he was on AEG Live’s national tour, he performed at HCPAC in February 2010 to a sold out audience. You won’t want to miss Ethan’s exclusive South Florida concerts as he performs an astounding musical repertoire that ranges from Mozart’s “Ala Turca” to Little Richard’s “Good Golly Miss Molly” to his own composition “Arctic Jazz.”

Ethan has already made four appearances on The Tonight Show With Jay Leno and been featured on The Oprah Winfrey Show and Good Morning America. “He is amazing and I love the showmanship,” said Good Morning America host Diane Sawyer after seeing Ethan perform. In February 2010, Ethan was the youngest participant in the “We Are the World 25 for Haiti” recording, where he performed alongside Barbra Streisand, Gladys Knight and Celine Dion. Ethan recently performed his first nationally aired PBS concert special, Ethan Bortnick and His Musical Time Machine, which was shown locally on WPBT and WXEL. Ethan has shared the stage with, among others, Beyoncé, Elton John, Natalie Cole, Smokey Robinson, Gloria Gaynor, and jazz trumpeter Arturo Sandoval. He is a gifted entertainer who engages audiences of all ages with his charm, humor and amazing range of musical tastes.

Ethan will kick off his headlining national tour on Jan., 14 2011 in Illinois and will be making two stops in Hollywood on March 5 and 6, 2011. Box office will open one hour prior to show time. To buy tickets prior to the day of the show, call 866. 811. 4111 or click here. Complimentary valet parking available.