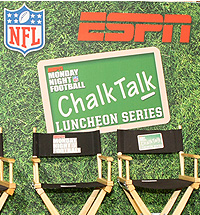 On October 4, 2010, in advance of the New England Patriots-Dolphins, the Monday Night Chalk Talk Series was held at the Sun Life Stadium, Miami, Florida.

The Chalk Talk will included an ESPN RISE Above Award segment where one male and one female high school student-athlete from the Miami area was honored for overcoming adversity and excelling in their sports and school, while motivating teammates/classmates to excel.

The game was a part of the NFL’s breast cancer awareness month initiatives and featured footballs with pink ribbon decals, on-field pink ribbon stencils, and many other pink items in show of support for the campaign. Former member of the singing group Destiny’s Child, Kelly Rowland was an invited guest.