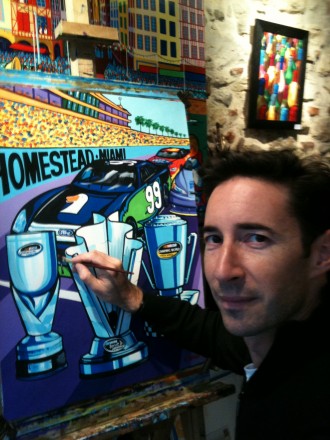 “Miami is a vibrant and colorful city,” said Matthew Becherer, Homestead-Miami Speedway Track President. “We want our 10-year commemorative program to be a collector’s item, and Erwin’s work fits our vision.”

Erwin Dazelle, from Bayonne, France is becoming one of the top-artists in the high-end motorsports industry. Among other major projects, Dazelle was the 2010 GRAND-AM Rolex 24 at Daytona and NASCAR Sprint Cup Series Brickyard 400 program cover artist as well as the California Central Coast Wine Country artist of the year. In addition to auto racing, Dazelle’s favorite themes are wine, super heroes and sports. He is a multi-talented artist who currently masters stained glass, steel sculpture, and painting. He began painting professionally in 1996 and after exhibitions throughout Europe and the United States; he is aiming for a successful international career.

Dazelle will be in attendance for this year’s Ford Championship Weekend and available to meet fans at the track. The original program cover artwork will be exhibited at Homestead-Miami Speedway during the event.