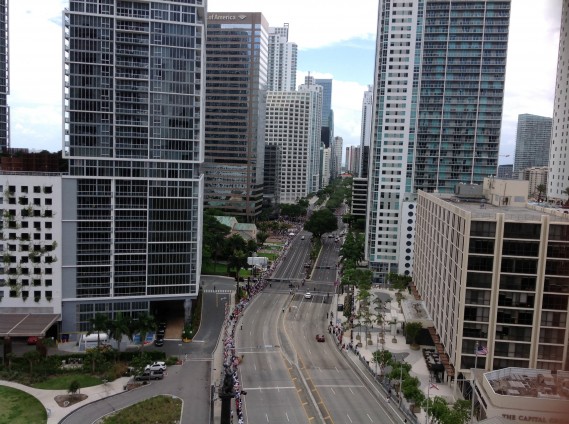 For the second year in a row, the Miami Heat have taken the NBA Championships and celebrated with a Parade of Champions through downtown Miami. Following suit are Kimpton’s EPIC Hotel and Area 31 Restaurant, which hosted their second annual viewing party today, giving fans the perfect bird’s eye view for taking in all the action and excitement.

Guests lined up along the terrace looking for James, Wade, Bosh and the rest of their team favorites to come through on the red and white double decker buses as they snapped pictures, took video and enjoyed Area 31’s new, expanded terrace bar which offered guests a complimentary coffee, juice and pastry bar starting at 9:00a.m., followed by a special HEAT menu that included specialties from the bar’s outside grill including Triple Threat: Onion, Salmon, Artichoke Dips, Mélange of Crispiness ($9), Mahi Ceviche, Pineapple, Cilantro, Plantain Chips ($9), Pulled Pork Tacos, Romaine, Bacon, Basil ($9) along with HEAT Bloody Marys ($5).

EPIC is a Heat fan favorite year-round, hosting visiting fans and locals with special packages and stay rates throughout the season up through the play-offs and championship games. The hotel also receives its share of players, who enjoy the added comfort of the hotel’s specially-designated “tall” rooms, which have higher-than-average shower heads, and longer beds for extra leg room.