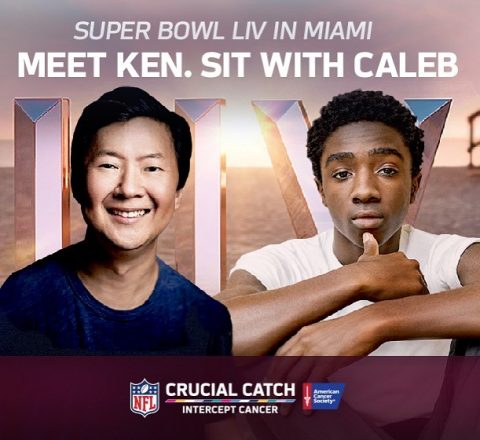 The American Cancer Society (ACS), through its National Football League (NFL) Crucial Catch partnership, announced today that one lucky fan will have the opportunity to meet The Masked Singer’s Ken Jeong and watch the Super Bowl LIV with Stranger Things star Caleb McLaughlin during a VIP weekend experience of a lifetime in Miami, the host city of this year’s game. The two stars are coming together to lend their support to the important work that ACS does through its Super Bowl Sweepstakes, where fans can support Crucial Catch’s mission of increasing early-detection and cancer prevention while enjoying an all-expense paid trip to the NFL’s biggest game.

“I am thrilled to be partnering with the NFL and American Cancer Society in the fight against cancer at Super Bowl LIV. This is a cause near and dear to my heart as my wife is a breast cancer survivor herself,” says Jeong. “The NFL and ACS will be able to provide cancer screenings and treatment to so many people in need.”

The ACS and the NFL will offer Crucial Catch Super Bowl Sweepstakes winner and a guest round trip airfare to Miami, lodging, two tickets to Super Bowl LIV sitting alongside McLaughlin, a meet and greet with Jeong, pre-game sideline passes, access to the hottest parties in Miami and other exclusive perks. NFL fans can enter the sweepstakes at CrucialCatch.NFL.com by donating a minimum of $10 to the American Cancer Society.

“There is no discrimination when it comes to cancer. It affects everyone, especially those in the under-privileged communities that can’t afford to get the screenings they need,” said McLaughlin. “For this reason, I am truly happy to be partnering with the NFL and the American Cancer Society for the 2020 Super Bowl. 100% of the funds raised will help benefit the many people who are in desperate need of lifesaving screenings/treatments.”

Since 2009, the NFL and American Cancer Society have partnered in the commitment to the fight against cancer. Crucial Catch helps more people catch cancer early, when it may be easier to treat and focuses on the prevention and early detection of multiple cancers, particularly in high-risk communities.

“We’re so thankful for Ken and Caleb’s commitment to the fight against cancer,” said Sharon Byers, Chief Development, Marketing and Communications Officer, American Cancer Society. “What better way to enjoy the NFL’s biggest game than raising funds for the fight and mingling with some of today’s biggest stars.”

Known for his scene stealing abilities, actor, producer, writer and comedian Ken Jeong has established himself as one of today’s top comedic stars. Since his feature film debut playing the doctor in KNOCKED UP in 2007, Jeong has gone on to star in several memorable roles in a series of successful comedies including his role as an Asian-mobster “Mr. Chow” in the sleeper-hit comedy THE HANGOVER. Recently, Jeong appeared in the Warner Bros. box office sensation CRAZY RICH ASIANS which grossed over $150 million worldwide and earned multiple nominations including Golden Globes, SAG, and People’s Choice. In February 2019, Jeong returned to his stand-up roots for his first-ever hit Netflix comedy special, “Ken Jeong: You Complete Me, Ho“, which earned him a People’s Choice nomination for “The Comedy Act of 2019.”  In television, Jeong can currently be seen as a judge on the FOX hit celebrity reality singing competition “The Masked Singer”, now in its second season. Prior to that, Ken starred on ABC’s “Dr. Ken”, which he was the creator, writer, and Executive Producer. Jeong’s career path started off on a different course. He earned his undergraduate degree at Duke University and went on to get his medical degree at the University of North Carolina.

Caleb McLaughlin stars as “Lucas Sinclair” in the Netflix global hit Stranger Things, which was renewed for a fourth season after the streaming giant revealed it was their “most-watched original series ever”. Recently, McLaughlin wrapped production on the film Concrete Cowboy which also stars Idris Elba and Jharrel Jerome. The film follows’ 15-year-old Cole (McLaughlin) who is taken to live with his estranged father (Elba) Harp in North Philadelphia, where he discovers the city’s vibrant urban cowboy subculture, which flourishes despite the surrounding poverty, violence, and encroachment of gentrification. McLaughlin will take the next major step in his burgeoning career with his debut as a recording artist, he plans to release new tracks and music videos in the new year. His music has an ultra-modern vibe with a fusion of R&B, electronic, and pop. He also recently released his own IGTV series, in association with ATTN: entitled Be Your Biggest Fan, based on a social movement he created online in which McLaughlin promotes self-love and self-confidence, while also giving his fans the opportunity to share their own stories and experiences.

In providing the ultimate Super Bowl LIV experience, the NFL and American Cancer Society continue their commitment to leading the fight against cancer and addressing the unequal burden of cancer in underserved communities.

The sweepstakes is operated by Fanthropic, a 15 Seconds of Fame company. “Our work and partnership with ACS is a prime example of why Fanthropic was created,” said Jarred Snyder, co-founder of Fanthropic. “Spanning all sports, we give fans the unique opportunity to experience incredible once-in-a-lifetime sporting events, all while helping to raise meaningful funds for charities and foundations.”

As the NFL’s official cancer partner, the American Cancer Society encourages fans to participate to help save lives, celebrate lives, and fight for a world without cancer.

For more information and to donate, please visit crucialcatch.nfl.com.