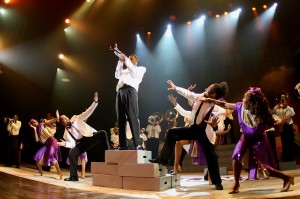 Now celebrating its Fifth Anniversary Season, the Adrienne Arsht Center for the Performing Arts of Miami-Dade County proudly presents the energetic musical phenomenon, DRUMLINE LIVE.  Based on the 2002 blockbuster film, Drumline, DRUMLINE LIVE will high-step into Miami for one night only on January 16, 2011 at 7 p.m., filling the John S. and James L. Knight Concert Hall with original compositions and soul-infused interpretations of top 40 hits.

Tickets to DRUMLINE LIVE are on sale now. Tickets range from $40 to $65 and may be purchased through the Adrienne Arsht Center box office by calling (305) 949-6722, or online at www.arshtcenter.org.

With the imaginative combination of sounds from musical greats from Michael Jackson to Earth, Wind, and Fire to on stage battles and Motown favorites, the band delights and amazes with classic as well as their own original compositions.  DRUMLINE LIVE brings the drum-pounding, percussion-blasting, high-stepping tradition of the marching band onto the stage for an intensely energetic performance sure to have audiences stomping their feet and clapping their hands. Sizzling choreography and daredevil athletic feats take the syncopated magic of marching band tradition straight to the stage!

“We hope Miami is ready to get out of their seats and move to the beat, as DRUMline Live brings its infectious, irrepressible sound to the Knight Concert Hall,” said M. John Richard, president and CEO of the Adrienne Arsht Center. “This performance honors the great musical tradition of marching bands, born on college campuses, and now exploding on stage for all of South Florida to enjoy.”

DRUMLINE LIVE is composed of 40 band members including one drum major, 33 percussion and wind players, 5 dancers, and one host, all from America’s historically black colleges and universities. Performances range from vividly choreographed routines to heavy doses of drum riffs and cadences.  The live stage show encompasses a rainbow of sound – from funk to R&B to oldies – this marching band amazes with sheer sonic adventure.

Don P. Roberts, creator and musical director of DRUMLINE LIVE, was inspired to produce the theatrical adaptation after serving as Executive Band Consultant for the hit movie Drumline.  Under Roberts’ direction, his 300 member band played the role of the Atlanta A&K marching band in the film.  As a result of Roberts coaching, training, original compositions, and choreography Drumline was nominated for Most Outstanding Motion Picture by the NAACP, and garnered the American Choreography Award.  A graduate of Florida Agricultural and Mechanical University (FAMU), Roberts served as drum major, student conductor, and student arranger.  FAMU is known as the university where the marching band traditional originated more than 50 years ago, and has long been regarded as having the nation’s preeminent marching band.  Roberts currently serves as the Instrumental Music Coordinator for the Dekalb County School System in Georgia. He also serves as President of Halftime Live, which provided the drumline for the Atlanta Falcons in 2006 and for the Atlanta Hawks in 2007 and 2008.