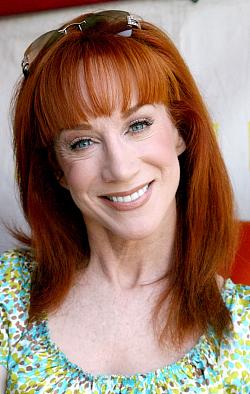 After moving west and joining the famed Los Angeles Groundlings comedy improvisational troupe, Griffin began building her resume with guest-starring roles on such series as “ER” and “Seinfeld,” where she created recurring character Sally Weaver. Upon gaining notoriety as a stand-up comedienne, she landed her own HBO Half-Hour Comedy Special. In 1998, HBO gave Griffin her own one-hour special, A Hot Cup of Talk.

Griffin has supplied voices for characters on the animated series Dilbert and The Simpsons, and has appeared in a dual role on the X-Files, as well as in Eminem’s video, “The Real Slim Shady,” which was co-directed by Dr. Dre. Griffin has co-hosted The Billboard Music Awards three years in a row and has appeared on numerous talk shows including Late Night with David Letterman, The Tonight Show with Jay Leno, Howard Stern and The View.  She has been featured in the films It’s Pat and Four Rooms, among others.

Griffin has a great passion for reality TV. She participated in, and won Celebrity Mole on ABC, and then hosted the NBC reality series Average Joe as well as the MTV series, Kathy’s So-Called Reality.

Griffin has yearly performed successful stand-up specials for Bravo. The first, in 2005, was called Kathy Griffin…Is Not Nicole Kidman, and the second, in May of 2006, was Strong Black Woman. Other stand-up specials, Allegedly and Everybody Can Suck It are also available in stores.

In August 2005 Kathy’s reality show, Kathy Griffin: My Life on the D-List, debuted on Bravo to rave reviews. The first three seasons of that show were each nominated for an Emmy for Outstanding Reality Program. Seasons three and four won that prize back-to-back in September of 2007 and 2008.

Tickets cost $76, $66, $56 $46.* All seats are reserved and available at the Hard Rock Live Box Office, open Tuesday – Saturday from noon to 7 p.m. and on Sunday & Monday – only open on event days at noon. Tickets also are available at all Ticketmaster outlets online at www.ticketmaster.com or charge by phone: 1-800-745-3000. Doors open one-hour prior to show start time. *Additional fees may apply.