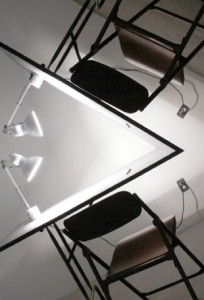 Dorsch Gallery is pleased to present a solo exhibition by Brookhart Jonquil called Never Odd or Even. The opening reception is Friday, April 8, 6-9pm and the exhibition will be on view through Saturday, May 7, 2011.
“While my sculptures and installations are certainly tangible, they are in constant dialog with the virtual and formless. I use reflective surfaces to open up perceptual spaces within architecture, and I use solid forms to perceptually collapse physical spaces. Mirrors, glass, digital photographs, and everyday objects have material qualities that I use to probe the relationship between the physical and the virtual or intangible. In my work I attempt to access this paradoxical duality, creating uncanny situations where a space, an object, or a moment in time, seems to contradict its own existence.
An example of this could be Never Odd or Even. The installation is an anonymous studio or office consisting of a chair, a lamp, a table with a paperback book jammed under one foot, and a few other small items. The room is physically doubled to create a perceptual mirrored space, folding in on itself. Objects intersect with their doppelgängers and a concrete floor is disorientingly angled upside-down. The title of the piece is also the title of the paperback book that levels both tables in defiance of gravitational sense. The phrase is a palindrome, and speaks not only to the formal arrangement of the space, but of the inevitable failure of quantitative logic set up as an oppositional binary. The space is not one real table and one reflected table; they are equally real but equally contingent upon the other to define their reality.
Installations such as this can be understood in the context of contemporary information-based media. Copying and pasting, pushing and pulling architecture, achieving impossible forms that seem natural and effortless due to our aesthetic saturation with things that have been manipulated or created entirely out of digital ether. I use digital media to sketch out my spaces before I begin construction. This affords me not only a high degree of accuracy in my measurements when the time comes to build, but it allows me to fluidly manipulate forms in a weightless space where material is infinitely malleable. Most importantly, the objects and installations that I create from these sketches retain the qualities of their intangible origin, and take on an uncanny sense of the impossible.”
~ Brookhart Jonquil (February, 2011)
Dorsch Gallery introduced Jonquil’s work to Miami in the group show Bubble Raft in September 2010. In this work, called Looking Both Ways, the viewer climbs a short ladder to look at two mirrors set at 90º. The mirrors split the vision: one eye sees a dart stuck in the wall, the other eye sees a drawing of the same. The mind registers the two sources as a single reality.
Never Odd or Even is Jonquil’s first solo show in South Florida. Jonquil received his MFA from the School of the Art Institute of Chicago in 2010. He has a BFA and BA (Art History), both Magna Cum Laude, from the University of Arizona. He studied at the Leipzig Academy of Art in Germany. His work has been shown in numerous venues in Chicago, as well as the Museum of Contemporary Art in Tucson, the Web Biennial at the Istanbul Contemporary Art Museum, the Oriahovo Gallery of Art in Bulgaria and Apex Art in New York. He has received numerous awards, including two grants to attend the School of the Art Institute of Chicago, an individual artist grant from the Tucson Prima Arts Council, and a Creative Achievement Award from the University of Arizona. He is an instructor at the Art Institute of Chicago. He lives and works in Chicago, Illinois.