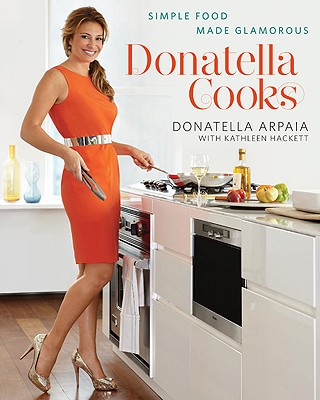 To be introduced by Chef Allen Susser
Sample the evening’s featured recipe: Baked Figs with Prosciutto and Gorgonzola

Donatella Arpaia, the dynamic attorney-turned restaurateur has become one of the most influential forces in the food industry. Not only a food expert and authority on entertaining, she is also a successful businesswoman who has created a string of successful restaurants within only a few years.

Raised in the restaurant world, Donatella later studied law and became a corporate attorney. But the lure of the restaurant world proved too strong, and in 1998 she returned to her passion, applying her business savvy to her personal love for food. Donatella didn’t waste any time–within five years she had opened a string of New York’s hottest restaurants – including David Burke & Donatella and dona. As well as being crowned by Zagat’s “The Hostest with the Mostest”. March 2006 saw the opening of dona – which means “gift” in Italian and is Donatella’s nickname and is sure to be another huge success.

Redefining the traditional role of restaurateur, Donatella is much more “hands-on” each of her New York City restaurants than most owners would be. Involved intimately in everything from the design, to the sourcing of the ingredients on the menus she helps to create, Donatella is enmeshed in all parts of the restaurant experience. Understanding that how people feel in a restaurant is as important as the food they eat, Donatella has personally revived the personal touch in the restaurants she has opened. Every day or night of the week you can find Donatella at one of her restaurants working her magic- be it David Burke and Donatella or dona, personally ensuring that everyone is looked after. Whether it is entertaining Diane Sawyer or hip-hop stars like Mary J. Blige, Donatella is equally at ease. As Donatella says, “I throw a party every night of the week for a living- what could be better?”

And when it comes to personal style, Donatella is definitely more Missoni and Marni than “mama mia”—and she believes that everyone’s own style should carry over into the atmosphere they create for friends and family. That is Donatella’s secret: she makes entertaining and cooking easy and fun, even for busy people who have little or no experience in the kitchen.