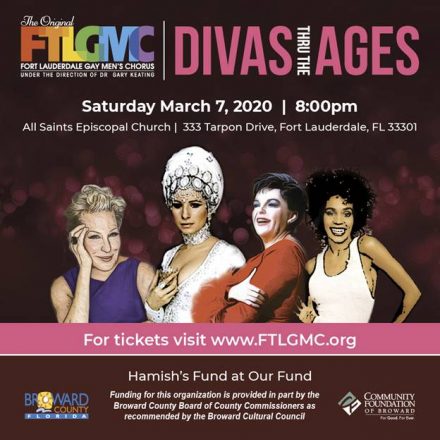 Are you a fan of Barbra Streisand, Whitney Houston or Tina Turner? These female music legends and others will be the cause for celebration during the Fort Lauderdale Gay Men’s Chorus’s (FTLGMC) spring show, “Divas Thru The Ages” on Sunday, March 7, at 8 p.m. at All Saints Episcopal Church (333 Tarpon Drive in Fort Lauderdale).

This musical journey will feature hits from Diana Ross, Gloria Gaynor, Idina Menzel, Bette Midler and the Andrew Sisters. Recognizable songs from the past 100 years will include “New York, New York” by Liza Minnelli, “Lady Marmalade” by Patti LaBelle, a medley of “Man That Got Away” and “Over the Rainbow” by Judy Garland plus more!

General admission tickets for the “Divas Thru The Ages” concert are $25, VIP tickets with priority seating are priced at $40, plus a small service fee and are available online at http://ftlgmc.brownpapertickets.com/ or by calling (954) 832-0060.