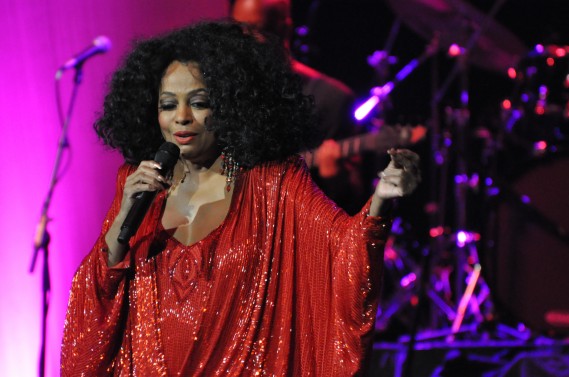 In a remarkable career spanning over 40 years, Diana Ross has proven herself the consummate music artist as well as one of the most iconic female singers of all time. As one of the most prominent women in popular music, history and pop culture, Ross is an Academy Award-nominated actress for her unforgettable role as Billie Holiday in Lady Sings the Blues, a Tony and Golden Globe winner, a bestselling author, winner of eight American Music Awards and a recipient of The Kennedy Center Honors. Her reputation as a woman of great style and beauty has put her on the covers of hundreds of magazines. Ross has sold over 100 million records and recorded 18 #1 hits.

Ross’ music became the sound of young America in the ‘60s soon after she signed with Motown Records in 1961 with The Supremes. Ross’ group hits include “Where Did Our Love Go?,” Baby Love,” “Come See About Me,” “Stop! In the Name of Love,” “You Can’t Hurry Love,” “Back in My Arms, Again” and “Someday We’ll Be Together.”

In 1970, Ross branched out to establish a hugely successful solo career. In the following two decades, she became one of the most successful female artists of the rock/pop era parlaying her success into triumphs in film, television and Broadway.

Her first solo venture, the gospel-influenced “Reach Out and Touch (Somebody’s Hand),” peaked at #20 on the Billboard Hot 100. The album’s second single, a cover of the 1967 hit “Ain’t No Mountain High Enough

From 1973 to 1980 Ross turned out a string of top hits including “You Are Everything (with Marvin Gaye),” “Touch Me in the Morning,” “Why Do Fools Fall in Love,” “Mirror, Mirror,” “All Of My Life,”  “Love Hangover,” “Upside Down,”  “I’m Coming Out,” and the movie score hits “Theme From Mahogany (Do You Know Where You’re Going To)” and “It’s My Turn,” both in which she also starred as an actress.

The 1980s saw Ross secure the biggest hit of her career with another movie theme, “Endless Love,” a duet with Lionel Richie. Following was the Top Ten hit “Muscles,” written and produced by Michael Jackson and “Missing You.”

Outside of her recording career, her achievements are many. In 1993, The Guinness Book of World Records jointly awarded her with its “Lifetime Achievement Award” and the title of “most successful female vocalist of all time.” In 1994, the multi-talented singer published her autobiography followed by a dramatic television debut in Out of Darkness, of which she also acted as executive producer. Her role as a victim of schizophrenia earned her glowing reviews and a Golden Globe nomination. In addition to her Oscar®-nominated role in Lady Sings the Blues, she has also starred in The Wiz. Through her own company Anaid Film Productions Inc., she has executive-produced five specials for ABC, CBS, HBO and Showtime.

Ross has been celebrated by MAC Cosmetics and is among the 25 legends (including Tina Turner, Coretta Scott King and Maya Angelou) honored by Oprah Winfrey as her personal heroines.

In 2012, Ross received her first Grammy – a lifetime achievement award for her contribution to the recording industry – at the 54th Annual Grammy Award Reception. Ross had received a number of Grammy nominations over the course of her 50-year career but never won the award.