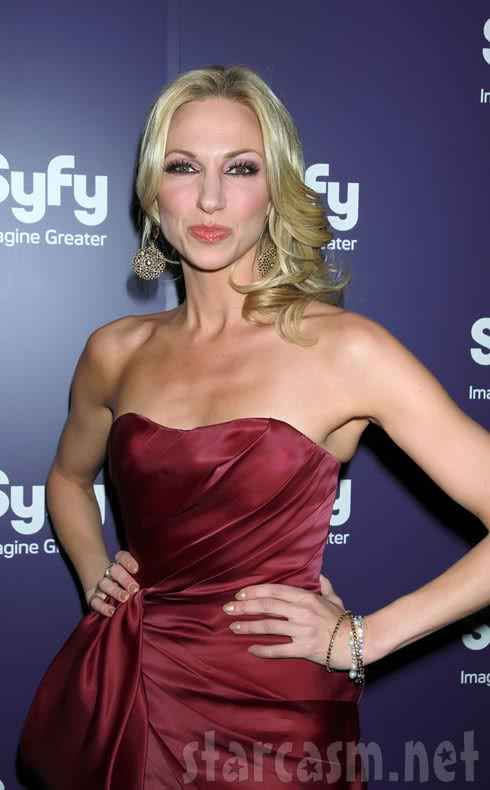 In what promises to be the television movie event of 2011, 1980s singing sensations Debbie Gibson and Tiffany get down and dirty in their long-awaited pop princess smackdown when they co-star in the ripped-from-the-headlines Syfy Saturday Original Movie, Mega Python Vs Gatoroid, which will premiere Saturday, January 29, at 9PM (ET/PT).

Debbie Gibson took some time to discuss her upcoming role with teen rival Tiffany, her playboy spread, her fears for teen stars and future projects. 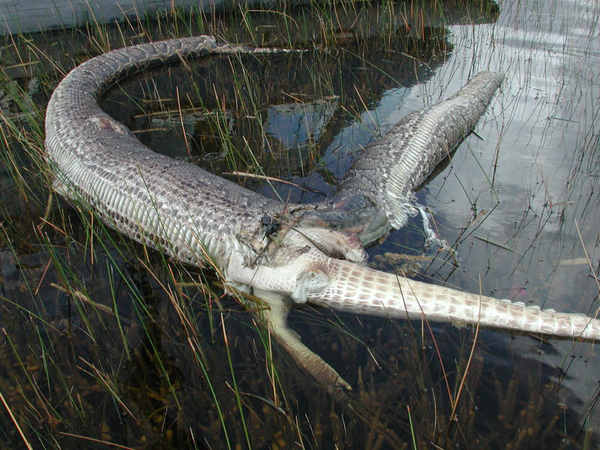 Can you describe your current relationship on an off screen, and will we see a cat fight in the movies between you and Tiffany? And what is it like working together?

Debbie Gibson: I think it’ll be more therapeutic for people to watch who have fantasized about that happening. I know that this is not what you want to hear but I really never did have the desire to slap Tiffany in the face. Just in the movie. See the movie. Oh my God. No, we did a sitting. We didn’t even fight over who’s going to get what clothes. I know it’s very sad. I’m sorry we don’t hate each other more. Back in the day we were both kind of running so fast and we would cross paths, doing a TV show here or there or whatever. But it was really like ships in the night. This was a chance for us to really work together. I know I speak for myself where I definitely developed a lot of admiration for Tiffany and her abilities and her work ethic and besides the fact that we just had a crazy good fun. Like at one point we were ducked under a table slathered in like whipped cream and banana cream pie and we looked at each other and went what? What is going on here? We’ve been put in the same sentence forever and ever and we’re well aware that there are definite pop-culture fans out there that have wanted us to collaborate on something for a long time. And we’re just happy to like give them what they want. We’re giving the people what they want. We’re giving you what you want and more. 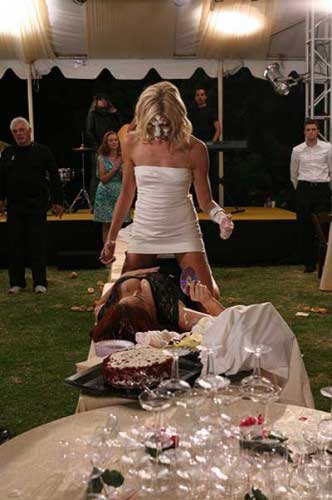 I got a call one day and I was almost waiting for that call. I knew that when I did one and then she did one I figured at some point that it might come up. I was like oh my God. I did go through a process with that. I thought is it too gimmicky? Will people start putting us in the same category all the time?  Let’s not overanalyze this. This is going to be a blast and it’s going to be giving people what they want and we’re going to have a great time.

I just actually recently sent Tiffany an email saying that I really feel the most fun I had was working on this movie. It was the highlight of my year. It was so much fun I went into withdrawal when it was over. This is a funny story actually. I recently read that Fergie does this too. I bring everything to my therapist. I’m like do you think this would be good for me? What do we think? He actually said to me, tell me about Tiffany’s character. Like is she a woman of great character? And I said she is a woman of great character. He goes then you should do it. Because that it is important that we really bonded and had a good time and had a shared work ethic, which we did. I think we do have all that. And I think we are both very “normal people” who take pride in having our real personal lives. And she’s a mom, a great mom and that’s a huge juggling act. I think we did really enjoy getting to know that about each other. But I think we have a mutual respect for each other as just as women at this point.

You started your career at a very young age. What was it like back then for you and can you relate to young artist like Brittany Spears, Justin Bieber who started young also?

Debbie Gibson: It’s A we were more responsible. We were not seeking out fame for fame sake. We

did retreat to our respective hometowns. And the paparazzi were not looking – even if the paparazzi were as bad as they are now they were not going to look to find me at a bowling alley or a roller rink on Long Island which is pretty much where I was in my down time, not very exciting for tabloid fodder. So yes, I mean the extent of it for me was like my street was closed off on prom night because the paparazzi – and graduation. They wanted to get a picture of me graduating and they wanted to get pictures of me going to the prom. That was about the extent of it which for them was a big deal. For now I don’t envy the teen stars growing up right now and having their every move being scrutinized. Tiffany and I I think we did make good choices. We were not partiers and all that. With that said nine out of ten teenagers are so if somebody is just going to want to grow up and develop at their own rate and in their own time it is a shame that their every move is documented. I mean God if every teenager’s every move was documented. We’d be seeing a lot of scary stuff. But, that’s why kids go to college and they experiment. And it’s kind of a shame that there’s really like nothing sacred anymore. Somebody goes into a bathroom at a party and they’re snapped on an iPhone and it’s everywhere, it’s really daunting. I don’t know that I would have escaped with my sanity had I had to deal with that. I think that’s a lot to ask of anyone to deal with. 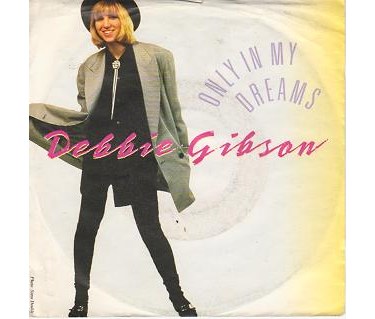 Well it’s funny because both Tiffany and I did Playboy and if you consider that, you say oh God people like to think of us as, virginal little teenagers and will this offend them. And so there is more to think about when you do have a “likable” persona if you will. It’s almost easier to be scandalous and disliked, because you then can kind of get away with anything you want. But with that said, I think you take that into consideration but then you can’t be restricted either by carrying so much what people are going to think and so much like protecting some image or some persona that you had 100 years ago. Everybody grows, changes, evolves. So I remember when Playboy came up I thought oh my God, like I proclaimed back in the day that nudity is bad and I would never do Playboy. But, if we all lived by things we said when we were 16 we would never grow. So…It definitely is its own challenge when you are likable and you do have a “certain image.” But for me I’ve chosen to not get stuck in that or let that really affect my choices to any great degree because at the end of the day I have to be happy with my choices and then people can like it or not. And luckily people have been very respectful of the fact that I do make my choices and stand by them. And then people whether they like them or not they’d still support the choices and me and similarly for Tiffany.

Advice for young people in the business

Debbie Gibson: Stay open to doing all these things and be versatile and make sure your chops are developed in every area because to have a long sustainable career that’s why Tiffany and I are still here doing this because we’ve been able to be versatile and do new things. 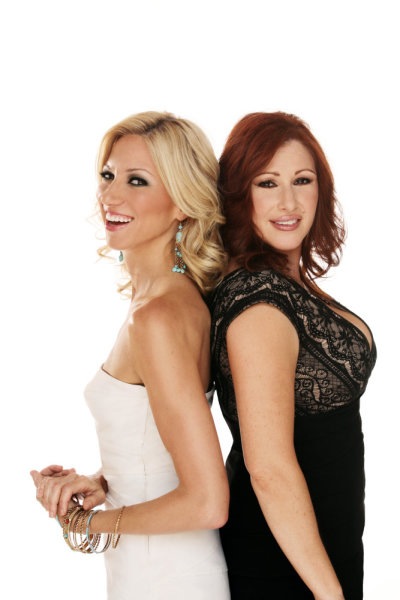 Deborah Gibson on working together on future projects with Tiffany

Deborah Gibson: Well yes I mean for starters we’re doing like in appearance together this weekend at the Canal Room in New York. I mean I don’t know how Tiffany feels about this but, I’ve always wanted to reestablish my next chapter in music before doing that. And in a way that’s what New Kids did. They had this incredible new hit album established who they are currently and now they’re pairing up. So I could see things possibly going in that direction. I’m somebody who takes one step at a time and I never say never. If something comes up and it interests she and I I’m sure we would both entertain it. I think if it deterred us each from our individual musical goals then – and it wasn’t right then we wouldn’t. I mean I’m certainly open to entertaining anything. I mean like she said earlier who would’ve thought this movie would’ve come up and we would have gone sure. Tiffany and I and alligators and pythons okay. You could never of even envisioned that coming up. So yes I mean I’m open to it if it’s the right thing at the right time. Yes I mean I think it’s what Tiffany’s saying too like I agree there it’s – and it’s both things.